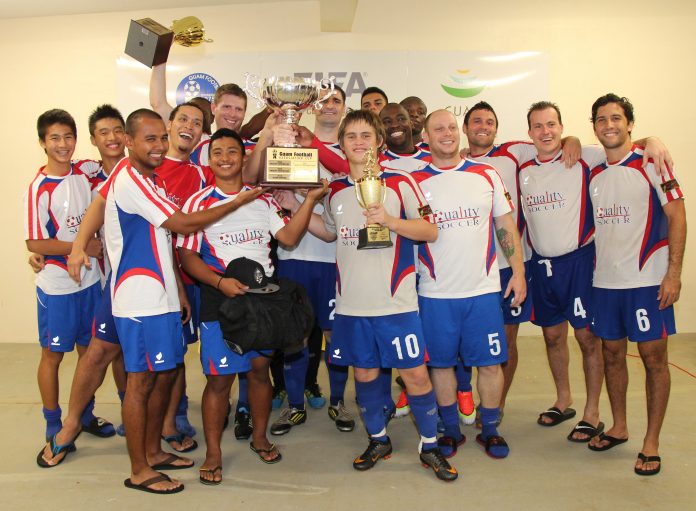 Harmon, Guam – Quality Distributors FC invigorated its fans with a faster-paced and much stronger second-half showing to eclipse Table 35 Espada FC 2-1 in the championship game of the 6th Annual Guam FA Cup presented by Bank of Guam and Table 35 Restaurant & Bar at the Guam Football Association National Training Center.

For the fourth time in six years, the Quality Distributors FC team proudly hoisted one of the most coveted pieces of hardware in Guam soccer – the Guam FA Cup, the symbol of the year’s top men’s soccer team. Quality Distributors FC won the inaugural tournament, as well as the tournament’s second edition. The most recent year the team won the tournament was 2011. Guam Shipyard remains as the only other team that has had won the distinction of Guam FA Cup champion, winning in 2010 and 2012.

Table 35 Espada FC, a team that dismantled Guam Shipyard 9-1 in the semifinals, broke the scoreless deadlock just before the 40-minute mark when T.J. Atalig managed to break through Quality’s defensive lines and send a shot from the top of the box that escaped the reach of Quality goalkeeper Brett Maluwelmeng. Both teams were able to close each other down through to the halftime whistle.

Quality, looking for an answer in the second half, started its attack early on, with a couple of line-breaking plays that began to frustrate Table 35 defenders. Aggressive defending eventually led to a handball violation against Table 35 in the box, prompting a penalty kick for Quality. Scott Leon Guerrero’s ensuing shot sailed past Table 35 goalkeeper Joe Laanan and into the net, knotting the game at 1-all.  Less than 10 minutes later, Quality’s Scott Spindel found an opportunity after reading a Table 35 pass and ran the ball through to the goal for the eventual game-winner. Despite losing the lead, Table 35 continued to look for goal-scoring opportunities through to the final minutes of the match on a variety of set pieces and crosses from the wings, but Maluwelmeng was relentless in the goal, diving for key saves to prevent the possibility of an equalizer for extra time.

Next up for the men’s teams are the Land Shark Beach Soccer League and the Docomo Pacific Men’s Futsal League.