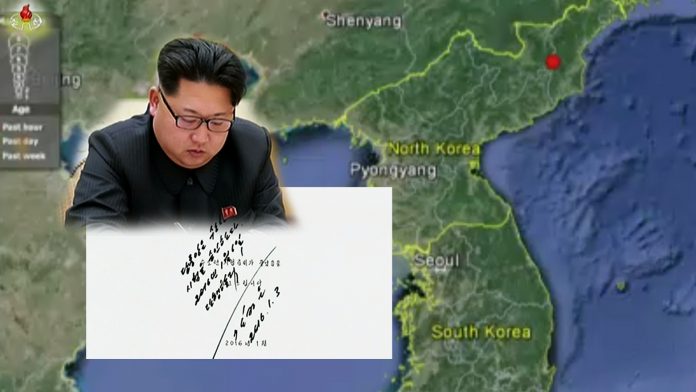 Guam Homeland Security has yet to receive substantial evidence that a hydrogen bomb was indeed successfully tested, but continues to monitor the North Korean broadcast closely. In the image above, North Korean leader Kim Jong-un is seen signing the order to test the hydrogen bomb.

Guam – At 10 a.m. today, January 6th, the U.S. Geological Survey detected a 5.1 earthquake which a public broadcast from North Korea’s capital, Pyongyang, claims is the result of their first successful hydrogen bomb testing.

According to the Guam Office of Civil Defense, the Offices of Guam Homeland Security (OHS) and the Mariana Regional Fusion Center (MRFC) are currently monitoring North Korea’s broadcast since its announcement that a regime in North Korea had successfully conducted an underground hydrogen bomb test for the first time.

Although there is no substantial evidence confirming the bomb’s detonation, the OHS and MRFC will continue to assess the situation closely.

Guam and the surrounding Marianas islands are not at risk at this time, but residents are asked to report any suspicious activity to local authorities, law enforcement and the MRFC at www.mlrin.org.