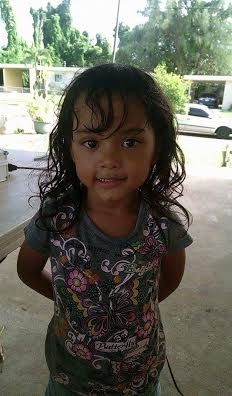 Family members of the girl have identified her as Carlie Jean Quichocho.

Guam – The five-year old girl who was hit while crossing the street on her bicycle in Mangilao yesterday(Thurs.) has passed away.

Family members of the girl have identified her as Carlie Jean Quichocho family members shared her picture on social media earlier today and asked the public for prayers. Quichocho was hit by a man who was driving a 2005 Nissan Sentra while she and her 12 year old brother were trying to cross the street on their bicycles towards the Mobil Gas station in Mangilao. According to Officer Perez the kids live in the Taitano Apartments next to Pacific Tyre in Mangilao. GPD closed the road in front of Mobil yesterday(Thurs.) to investigate the crash. The car that hit Carlie was still there in the center lane with her bicycle wedged underneath it. The crash itself happened in middle of the road in front of Mobil.

A 2nd person tests positive for COVID at Our Lady of...