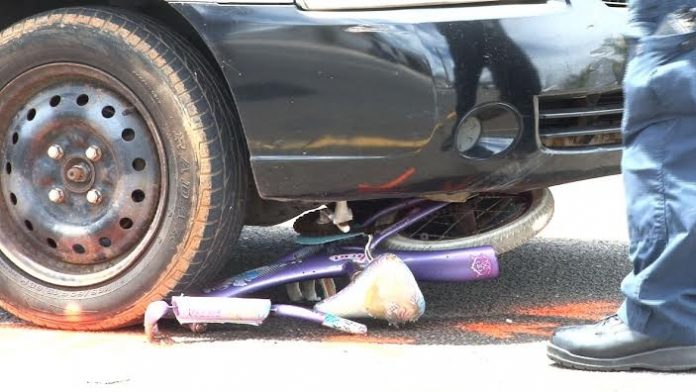 A car hit a 5 year old girl when she and her 14 year old brother were crossing the street on their bicycles to the Mobil gas station in Mangilao.

Guam – A five year old girl is in critical but stable condition after a car hit her while she was riding her bike in Mangilao. Police were on the scene this morning(Tues) investigating the crash.

“At about 10:27am this morning a vehicle traveling southbound on Route Ten that’s towards Chalan Pago while on the inner lane collided with a female minor riding her bicycle crossing the street towards the mobile service station,” said Highway Patrol Division Supervisor Officer Frank Perez. According to Perez says the five year old girl was treated at the scene and CPR was administered before she was taken to the Naval Hospital. GPD Capt Kim Santos says the girl is listed in critical but stable condition.

This morning the girl’s bike could still be seen wedged underneath the 2005 Nissan Sentra. Her shirt lay several yards away closer to the Mobil gas station which is where police say the accident actually occurred when the girl and her brother who were both riding bicycles crossed the street to the Mobil gas station. “I was told by one of my officers that the brother a twelve year old boy was or actually she was following him but she entered the roadway first before the brother when the collision occurred,” said Officer Perez. “Now they were crossing the street from mobile to the other side or from the other side to mobile?” asked PNC. “From the other side to the mobile service station,” said Officer Perez.

Three witnesses at the Mobil Gas station told PNC that they had seen the girl and her brother at the Mobil Gas Station yesterday. They said the girl and her brother had been asking customers for money to buy snacks. The kids hung out at the gas station for about an hour until some customers bought them snacks. Then they left. Today it appears as if they were returning.

“Did the kids live in the area nearby? It’s down by Taitano’s apartments I believe right past the Pacific Tyre I don’t know if that’s nearby but they’re riding their bicycle so they can travel pretty far,” said Officer Perez.

Witnesses at the gas station and at the Oriental Kitchen restaurant nearby described the kids as Chamoru. Owner of the anything and everything thrift store Myrajean Aguon told PNC that she saw the mother of the girl running down the street towards the accident yelling “My baby! My baby!”

Officer Perez also described the victim as Chamoru and said that the driver of the car that struck her was from the FSM. Witnesses who were eating lunch at the Oriental Kitchen restaurant told PNC that the driver was and elderly man that was still at the scene while PNC cameras were there. The man was seen unlocking the car and removing some items before leaving with other people in another car.

It should be noted that the victim and her brother were not using a crosswalk when they crossed the street. “We just want to make sure that when you’re crossing use a crosswalk and make sure that you’re using bright clothing so that the motorists can see. Other than that I just hope that nobody else get’s hurt,” said Officer Perez.

No arrests have been made yet. Officer Perez says the case is still under investigation.