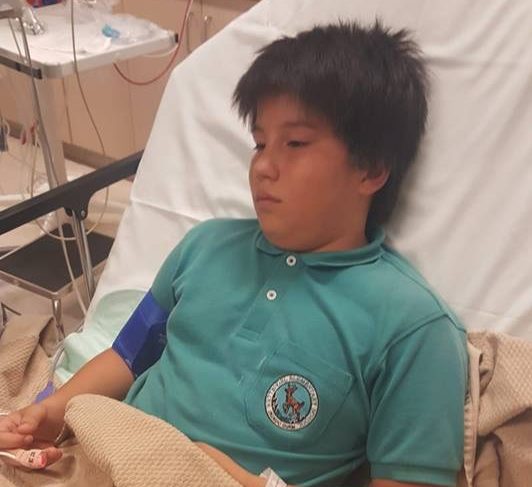 Guam – At least two fifth grade Wettengel Elementary students were rushed to the hospital today after they collapsed from allegedly being forced to stand outside in the blistering sun without water or bathroom breaks.

One of the students’ grandmother, Deborah Duenas, says she was told that an entire fifth grade class was forced to stand outside in the sun possibly for punishment. Duenas’s grandson was rushed to the emergency room of GRMC with severe hydration.

Duenas was told that the school nurse found the students in the sun and the school principal is investigating and interviewing teachers.

We spoke with Duenas’s daughter, Cassidy Brewer who said her son suffered from dehydration.

“When I finally got my son to talk, he told me that all the fifth graders were being punished for one class not listening. I’m not exactly sure the details of that, but they were in the sun, he says about 40 minutes with no bathroom or water breaks. He just got overheated, he threw up a few times. He said another kid was on the ground. So it was really disturbing just seeing him like that, it was really shocking. His eyes were bloodshot and he was hyperventilating. I freaked out at first and then I got just really upset when I found out the cause, the reason behind it. I just couldn’t believe the teachers would actually punish them in that way,” said Brewer.

Guam Department of Education Superintendent Jon Fernandez confirmed that they received a complaint about Wettengel Elementary School and that they have launched an investigation into the matter. He said that the students may have been outside to practice lining up, however, he could not provide details of the incident.