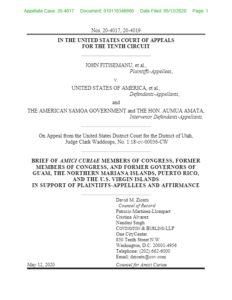 Six former and current elected leaders from Guam, the CNMI and other territories have filed friend of the court briefs in the case of Fitisemanu v. United States which seeks to establish that people born in U.S. territories have a constitutional right to U.S. citizenship.
Among them are Guam Congressman Michael San Nicolas, former Guam Governors Felix Camacho and Carl Gutierrez, and former NMI Governor Juan Babauta.
In a news release, civil rights attorney Neil Weare said their support provides “a major boost” to the case of Fitisemanu v. United States.

Last December, a federal district court in Utah ruled that anyone born in American Samoa should be recognized as a U.S. citizen, but placed his decision on hold pending appeal.

The United States has appealed the decision arguing it is Congress, not the Constitution, that answers the question of citizenship for people born in U.S. territories.

In his release, Weare, who is the President and Founder of Equally American, said: “We are thrilled to see such broad support for what should be a pretty simple concept – if you are born on U.S. soil, whether in a State or a Territory, the Constitution guarantees you the right to U.S. citizenship.”

“The amicus parties reflect a wide range of perspectives and experiences, which I think will help convince the Tenth Circuit to affirm the district court’s historic decision,” Weare said.

Members of Congress, Former Members of Congress, and Former Governors of Guam, the Northern Mariana Islands, Puerto Rico, and the U.S. Virgin Islands: Argues that reversal of the district court would imperil citizenship and increase marginalization in all Territories, and that the combined experiences of the Territories shows that recognition of U.S. citizenship does not threaten the distinct legal and cultural traditions of each Territory.

Citizenship Scholars: Demonstrates that the common law rule of citizenship by place of birth enshrined in the Fourteenth Amendment has deep roots in the American tradition and English Common Law, and that recognizing persons born in current Territories as U.S. citizens would not require recognition of U.S. citizenship for people born in former Territories like the Philippines.

Scholars of Constitutional Law and Legal History: Argues that the Insular Cases do not determine the scope of the Citizenship Clause and should not be extended beyond their holdings because they are constitutionally infirm and rest on antiquated notions of racial inferiority.

American Civil Liberties Union and ACLU of Utah: Examines the wide array of federal, state, and local rights and privileges denied to those who are unconstitutionally labeled by the federal government as “nationals, but not citizens” of the United States.

The Fitisemanu plaintiffs include John Fitisemanu and Pale and Rosavita Tuli, Utah residents born in American Samoa, who are denied recognition as citizens by the federal government based solely on where they were born in the United States. The Southern Utah Pacific Islander Coalition are also plaintiffs. At different points in time, the federal government has also denied recognition of citizenship to people born in Puerto Rico, Guam and the U.S. Virgin Islands, although Congress now recognizes these Americans as citizens.

The Fitisemanu plaintiffs’ brief along with briefs opposing recognition of citizenship in U.S. territories filed by the United States and American Samoa are available at www.equalrightsnow.org/fitisemanu.

The United States and American Samoa will have an opportunity to respond to the briefs in the coming weeks. An oral argument in the case is expected later this summer.

Fitisemanu is on an expedited schedule on appeal, with plaintiffs hoping for a decision from the Tenth Circuit before November so they might be able to vote in the upcoming presidential elections