Guam – Over 600 Soldiers of the Guam Army National Guard’s (GUARNG) 1-294th Infantry Regiment were airlifted Saturday to a training site in California to conduct their last Annual Training (AT) and continue preparations to deploy the unit to Afghanistan early next year.

This was only the second time such a large contingent of Army National Guard Soldiers will be airlifted to a training site at such a distance, about 8,000 miles away. The first AT in May was possibly the largest ever air movement operation of Army Guard members for AT by Air National Guard assets under a single operation, according to GUARNG officers.

The 1-294th IN RGT will spend three weeks at the Maneuver Training Center (MTC) Camp Roberts to perform their AT. The 42,361-acre base, operated by the California National Guard is used by Army National Guard and Army Reserve units for training on light and heavy maneuver (mounted and dismounted) operations, live-fire ranges from small arms to crew serve weapons, aerial gunnery, and drop zones.

Several states with Air National Guard assets are supporting the airlift operation, according to LTC George Charfauros, Deputy Chief of Staff for Operations and Plans. The military aircraft will be coming from states that include Arizona, Wisconsin, Oklahoma, Minnesota, Washington, Alaska, and Hawaii. The Soldiers will be flying out in groups via military aircraft and commercial transport.

[ Soldiers from 1-294th IN RGT line up to board their aircraft which will bring them to their annual training area in California. LTC George Charfauros, Deputy Chief of Staff for Plans and Operations, (top right) was on hand to wish the Soldiers good training. Close to 600 Soldiers will be conducting their annual training as they prepare for their deployment to Afghanistan early next year. Most of the Soldiers traveled on military aircraft, while about one-third of the battalion had to be accommodated on commercial flights.Photos courtesy Guam Guard]

The Guam Army National Guard (GUARNG) received the alert order for its 1-294th IN and F Company, 29th BSB for deployment to Afghanistan in support of Operation Enduring Freedom late last year. The unit then received its mobilization order last August, formalizing plans for their deployment.

The mobilization of the 1-294th IN RGT may also be considered as the largest group of reserve component troops to be mobilized and deployed from Guam. 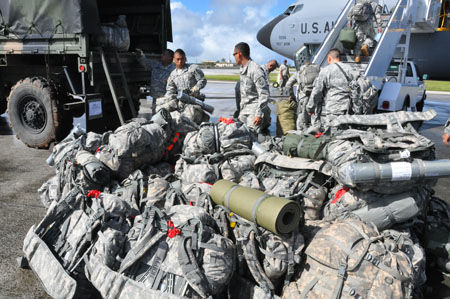 [Soldiers from 1-294th IN RGT prepare to move their gear onto the KC-135 from the Kansas Air National Guard’s 190th ARW which will transport them to their training area in California. Close to 600 Soldiers will be conducting their annual training as they prepare for their deployment to Afghanistan early next year. Most of the Soldiers traveled on military aircraft, while about one-third of the battalion had to be accomodated on commercial flights. Photos courtesy Guam Guard]