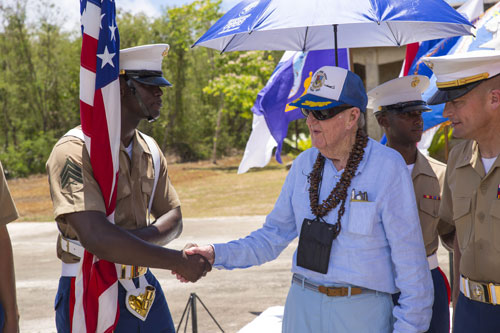 North Field, Tinian, CNMI  –  (DVIDS) – Community members of Tinian, Saipan and Guam, along with representatives from each U.S. branch of military service and veterans gathered June 12 at the historic North Field of Tinian for the 70th Anniversary Reunion of Honor.

The ceremony is part of a weeklong celebration paying tribute to both American and Japanese veterans of the battles of Saipan and Tinian during World War II.

“Perhaps nowhere else other than Tinian and Saipan can the indigenous Pacific Islanders empathize more with this memorial to all those who served and particularly to those who gave the ultimate sacrifice during the Pacific war,” said Ramon Dela Cruz, the mayor of Tinian. “Today we celebrate the peace that grew from the ashes of the most destructive war in human history.”

During the ceremony, a representative from each branch of the U.S. military spoke and paid homage to their respective service’s contributions to the battles that took place in the CNMI.

“The invasion of Tinian, described as the prefect amphibious landing, was a textbook lesson of ship-to-shore movement and combined arms,” said Col. Philip J. Zimmerman, the commanding officer of Marine Corps Activity Guam. “The entire Marianas campaign truly exemplifies the Navy-Marine Corps ability to project power, a nation that stands for freedom, and it also exemplifies the unselfish devotion of duty and courage of our greatest generation.”

“I could go on and on about war stories and my missions over japan,” said Kelly. “The one thing that I want to mention is we should remember the people who fought over Japan, the people who took off from this field in B-29’s and didn’t come back. We lost a lot of them. I feel very, very lucky to have been a part of a crew that flew more than 35 missions over japan, and although we got a lot of holes in our planes, none of us were ever touched. I think that’s amazing. I think God must have been looking out for us.

Kelly was accompanied on his trip to the CNMI by four of his five children, Mary, David, Dan and Terry.

“I am very, very pleased to be here and that my children got to see it,” said Kelly. “It is something we’ve wanted to do for years and I think it was worth it.”