The 72-hour pre-test requirement that most countries require, including Guam, may not be enough to prevent COVID-19 from spreading.

This was the warning aired by Benito Wheatley, special envoy of the British Virgin Islands (BVI), during the recent UOG-CIS conference held at the university.

According to Wheatley, it has been the BVI’s experience that the 72-hour COVID pre-test requirement is not foolproof.

He warned that BVI has had cases of visitors who tested negative during the 72-hour COVID pre-test, only to emerge positive for COVID-19 after they get out of quarantine.

Guam also recently had two doctors who tested negative during a 72-hour pre-test only to test positive later for the virus.

“That is why I would encourage everyone to figure out how you can improve the testing regime and have even more tests because the virus is very tricky,” Wheatley said.

Just like Guam, Wheatley said the BVI had a tremendous debate about reopening the economy because the people in the tourism industry were very anxious to get tourists back.

“But the government erred on the side of caution because we believe in protecting life first. So what we decided to do was to find the right balance for us. So we did the following. We adopted robust entry and health protocols,” Wheatley said.

Because of their experience with the 72-hour COVID pre-test, Wheatley said they are not solely relying on this and have adopted more stringent and rigorous procedures, including multiple tests during a visitor’s duration of stay and the use of tracking bracelets.

BVI has also limited visitors’ entry to one single point of entry — the airport. Its seaports have remained closed.

“Before coming to the BVI, you have to present a negative test before which is a PCR test upon entry, a rapid test, then four days of quarantine, and upon exiting quarantine, another PCR test. After leaving quarantine, you then have to put on a bracelet for tracking so that we know where you are in the country. And then before leaving, there is another PCR test that you must take before exiting so that we don’t have persons exporting COVID-19, from the BVI to other places in the world. So we leaned heavily on robust testing,” Wheatley said.

So far, Wheatley said the BVI’s COVID-19 mitigation measures seem to be working.

“Our positive cases have remained very low. They’re at zero up to about a month ago. We’ve had small spikes, we now have 18 cases, but it’s under control, and those numbers are dropping. So we believe that it is very much possible to successfully reopen an economy even before we had the vaccination program in place. Now, our vaccination program is meant to give greater protection to the local community and lower the risk of infection when we further open the economy,” Wheatley said.

The BVI has been hailed by the UNDP as a model in the Eastern Caribbean for how islands can open their economies successfully, especially a tourism economy, using a strong testing regime and minimal quarantine. 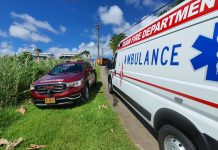