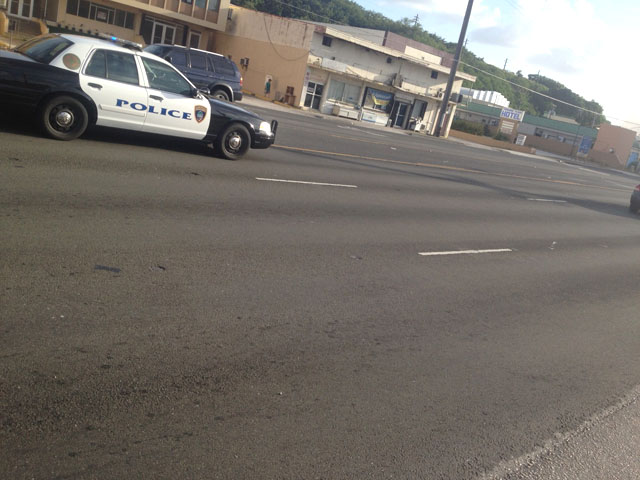 Guam –  GMH Spokeswoman June Perez confirms that a 73 year old woman who was injured in a traffic accident last Saturday died this morning at GMH.

Perez says that the woman passed away at 4:03am today.

The woman was a passenger in a vehicle that was involved in a 2 car accident that occurred on Route 1 in front of the old Block Buster building in Tamuning.

Guam Highway Patrol shut down a stretch of Marine Corps Drive this morning to take measurements of the accident scne after the woman died.

GPD Officer A.J. Balajadia reports that the accident occured about noon last Saturday. The woman was riding in the back seat of a 2009 Nissan Sentra when the man who was driving the car collided with a 2007 Mitsubishi Endeavor being driven by a woman who had just turned onto Marine Corps Drive from Serenu Avenue.

The woman’s death marks the third traffic fatality of the year on Guam.

BARRIGADA – The Guam Highway Patrol is investigation the islands reported 3rd Traffic Related Fatality for 2014.  Around 4:00am this morning a 75-yrs-old female who was riding in the back seat of a 2009 Nissan Sentra involved in a crash over the weekend died.

Both female passengers in the 2009 Nissan Sentra were transported to GMH.  The operator of the 2007 Misubishi Endeavor refused treatment.

2. Friday February 14: GMH Nursing Supervisor Bill Toves says the pedestrian victim of a hit and run driver died at GMH at 5:45 this afternoon. He is the second traffic fatality of the year on Guam.  His identify has not yet been released. Earlier, Nursing Supervisor Cely Mangrobang said the pedestrian was on life support, in “very critical” condition. The man was hit by a vehicle on Route 1 near Ypaopao Estates in Dededo. GFD Spokesman Lt. Ed Artero says the 911 call came in at 6:08am. He said CPR was conducted on the man at the scene, and enroute to GMH.