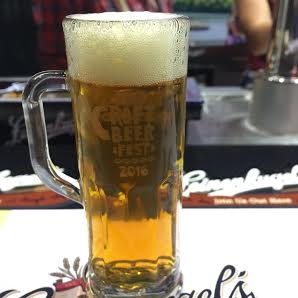 “We’re really just doing this for education and to grow the industry on Guam.”- Marivel Andersen 76 Circle K.

Guam – The 76 Circle K Craft Beer Fest was a success. The event allowed attendants to sample and taste a variety of beers from numerous distributors of craft beer on Guam.

“We’re really just doing this for education and to grow the industry on Guam,” said 76 Circle K’s Marivel Andersen. The craft beer industry has been booming but it wasn’t always this way.

Hansa imports has been bringing craft beer to Guam since the 1990’s but sales were slow. Hansa imports owner Ludwig Uhmeyer who also owns and operates the McKrautz Restaurant and Beer Garden in Malojloj says craft beer sales didn’t start to pick up until the 2000’s and really didn’t pick up until the last few years or so. One of the craft beers he imports is the Detmolder brand from a small town in Germany. “It’s a small brewery run by three ladies a mother and two daughters and they really specialize in handcrafted beers and top notch quality. Hundred percent brewed German beer from 1516,” said Uhmeyer.

One of the draws to craft beer is the amount of special care that goes into brewing each batch and the rarity of certain brews. “We have some exclusive beers that we brought in just for sampling they’re all from California they’re not distributed on Guam by any of the vendors but we just kinda wanted to treat the people that really know craft beer,” said Andersen.

Ambros wines and spirits manager Joey Salas says the increase in craft beers sales has led them to bring in new brands of craft beers for this years’ festival. “One is omission lager out of Portland Oregon is the first and only gluten free beer on island,” said Salas adding, “Our second new product right now and it’s seasonal is our Kona Coco Brown its a coconut nutty ale so its a nutty ale fused with roasted coconut so that’s a seasonal so once we’re out of that it’s gone.”

This years craft beer fest was held at the University of Guam field house on Saturday.