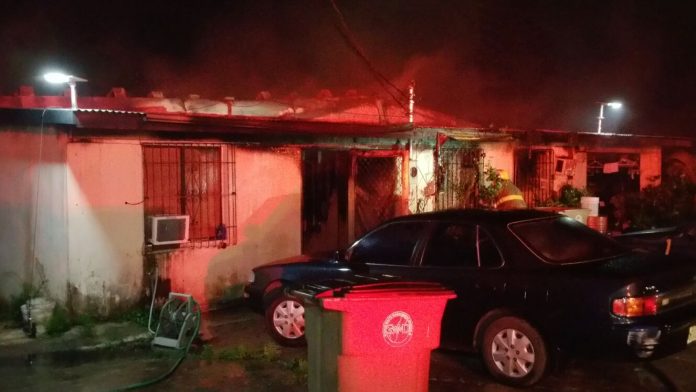 The victim was identified by his brother as 45-year-old Ernesto Tapang Jr.

Guam – GFD reports that at around 3:30 this morning, firefighters responded to a house fire on Chalan Agatelang in Machanao, Dededo, where eight residents were able to escape, but one was not.

“Upon arrival, fire crews confirmed a fully involved semi-concrete structure,” reports GFD Spokesperson Kevin Reilly, who says firefighters were notified that there was still one occupant inside the home after the eight residents made it out alive.

“Engine and rescue crews made entry and located the victim. The individual, pulseless and breathless, was removed from the house but suffered injuries beyond resuscitation. Lifesaving measures were withheld and patient was not transported pending investigation by GPD,” Reilly says.

The victim’s brother, Arnaldo Santiano Tapang says he awoke to some screams and yelling around 3 am. Before he knew it, his home was engulfed in flames.

Fortunately, he and seven others, including one child, were able to escape.

But Arnaldo’s brother, 45-year-old Ernesto Tapang Jr., was not able to make it out in time.

Arnaldo says at one point he heard his brother yelling and he tried to rush back into the home, but his relatives stopped him because it was too dangerous. Arnaldo says he tried to call out for his brother again, but when he didn’t answer, he was hopeful that meant his brother had made it out alive.

Dededo Vice Mayor Andrew Benavente is also on scene providing support to the family as he waits for the Red Cross to arrive.

Guam Fire is on scene to determine the cause of the fire.