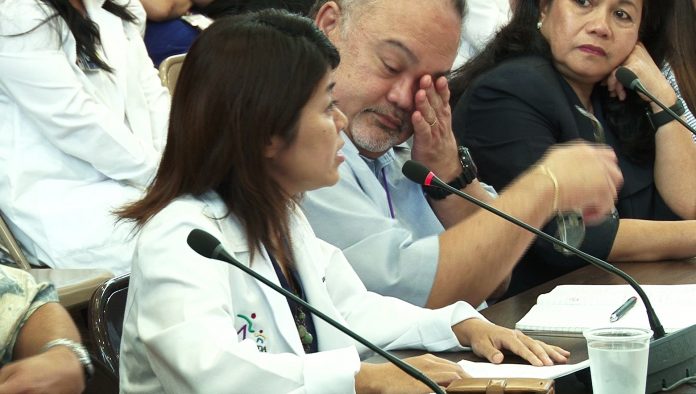 The Guam Memorial Hospital’s new assistant medical director shared heartfelt stories about some of the patients she’s treated in the short time she’s been with GMH.

Guam – Budget talks continued and today the Guam Memorial Hospital was up. As is expected in budget hearings for GovGuam agencies, senators didn’t spare the Guam Memorial Hospital from their tough and sometimes demanding questions about the state of the island’s only government-run hospital. But it was critical care pediatrician and GMH’s Assistant Medical Director Dr. Kozue Shimabukuro who not only silenced the room but brought everyone to tears.

“Patients die and then I go home and wonder, I could have done something else but I couldn’t because we didn’t have money,” said Shimabukuro.

Shimabukuro is new to the island from California, telling lawmakers today that she was in shock when she was given an opportunity for a closer look into the state of GMH.

It’s so bad, in fact, that Dr. Shimabukuro says the ventilator GMH uses in its pediatric department is obsolete.

“The ventilator that I saw, the unit, I have never seen it before except when I went to Africa when I was doing a mission trip. I saw it and I said, ‘I know how to work this because I was in Africa and I was taught how to use it.’ In US you would never see that kind of antiquated, old equipment,” Shimabukuro pointed out.

GMH has notoriously been engulfed in debt. Up until recently when the hospital received a $45 million loan to pay off its mounting debt, the hospital was in jeopardy of losing vendors who provide critical-care items because of non-payment. GMH administrators have repeatedly told lawmakers that the Medicare reimbursement rate they receive from the Center for Medicare and Medicaid is substantially low which they contend has been the root of their cash problems.

But Shimabukuro defended the freshly-grilled hospital administrators from questions about GMH operations, pointing out that while lawmakers interrogate them, at the center of this “impersonal” debate are the patients.

“[To] these guys you say, ‘Why haven’t you collected enough? Why haven’t you done enough?’ You can continue to say that but the fact is with the $1,100 per day reimbursement from CMS … with that money, we will never be able to fund what we are doing operationally,” she argued.

“But what gets caught in between is my patients; the children,” she continued, choking on tears. “I’m gonna tell you something, because I don’t wanna make it something like tearful, but this just happened–it’s happening–that’s the reason why my phone is ringing right now. I have a patient right now who is bleeding to death.”

Dr. Shimabukuro says unfortunately, because Guam does not have a simple piece of equipment called an endoscope, she’s unable to determine what’s causing the bleeding.

“We are tired of saying it to the mothers, ‘We’re gonna do the best we can. We’re gonna MacGyver everything and invent something that might save your child,’ when I know for a fact there’s a standard of care, there’s an equipment that I could easily stop that bleeding and save this child,” she said emphatically.

She also shared the story of an 8-year-old patient who recently died of cancer. The patient’s family is poor and does not have any insurance which prevented them from seeking care for several months despite their son’s pain.

“Four months he had a headache. He was vomiting and finally at the end of the four months he couldn’t walk anymore. So who’s to see these patients? Us. GMH,” she shared. “Turns out that patient had a tumor–cancer. Because of poverty [his] parents couldn’t seek out medical care. Because of that, the tumor and cancer too advanced for me to do anything about it.”

“There’s so many things, heartbreaking cases that–these are your children, children of Guam,” she lamented.

As a physician who worked in some of the best hospitals in the world, Dr. Shimabukuro says she was comforted by the fact that those hospitals had the equipment that allowed her to tell families: “We did everything we could.”

“It’s easy to say, ‘You don’t pay us, so we’re not gonna see you.’ Then we don’t lose money. But we didn’t become physicians to say, ‘Hey, your mom doesn’t make enough money so I don’t wanna see you.’ To a 2 year old!” she exclaimed. “We are not asking [for] money so that we can have a raise. We’re simply asking for the bare minimum for us to do our job; for us physicians to stand in front of the family member and say, ‘We’ve done everything. This community has done everything,'” she told senators. “Let us say that.”

She implored the senators to open up their hearts to these patients and to change their perspective on the hospital. Finally, she ended with this.

“We didn’t come here to say we’re gonna make money on you. We came here, we serve every day, we get up every day knowing that what we do may not save these children or patients. Still this is our responsibility to humanity and to everybody on this island,” she said as the public hearing room erupted in applause.