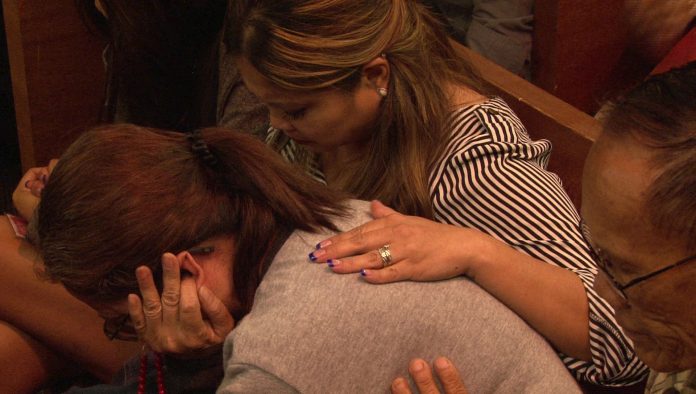 In the murder trial of Mark Torre Jr., the prosecution rested its case after presenting the recording of the 911 calls made by Sgt. Elbert Piolo on the night he was shot.

Guam – It was a tearful afternoon in court today when the 911 recording was played on Day 9 of the Mark Torre Jr. murder trial. Taking the stand was Guam Fire Department Emergency Medical Dispatcher, Cherika Chargualaf, who took the call in the early morning of July 13, 2015.

In the recording, Piolo says his address was in Chalan Irensia in Dededo, where Guam Police Department Dededo Precinct units were immediately dispatched. At one point, Piolo is heard saying “Help me, LT. I’m gonna die… LT, LT, please help me. I’m dying. I’m dying. He shot me. He shot me.”

Chargualaf recalls speaking to three different people: Officer Elbert Piolo, Officer Mark Torre Jr., and Lt. Mark Torre Sr.  Of the three calls that were made to 911 from Piolo’s phone, only two were connected successfully, lasting 3 minutes and 15 and a half minutes respectively. Chargualaf testified that it was difficult to get straight answers from both Piolo and Torre, and that the address was not corrected until Lt. Torre took over the call and told her they were at the Torre residence in Yigo.

When asked how the incident occurred, Lt. Torre responded “We don’t know yet… We just need somebody here right away.”

According to Chargualaf, the call remained connected until medics arrived, and Piolo was still conscious by the time the call ended. Chargualaf confirmed that she had asked Mark Torre Jr. “Did he do it to himself?” to which Torre responded “Yes.” She also stated that no one else had called 911 that night regarding the incident.

The defense moved for the acquittal of all charges. Judge Michael Bordallo said the concern of the court is the first charge of murder as a first-degree felony, and the third charge of aggravated assault as a second-degree felony, for which he did not grant the motion for acquittal, stating the jury would able to make a decision.

The prosecution has rested its case in chief. The defense will present its case when trial resumes on Wednesday morning.