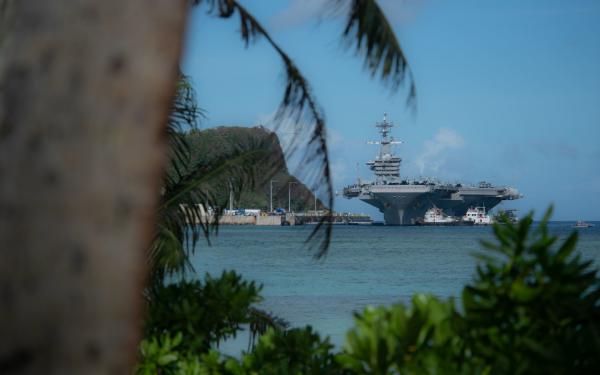 When the USS Theodore Roosevelt pulled into Apra Harbor last Friday with 23 cases of COVID-19 sailors aboard, Acting Navy Secretary Thomas Modly said no member of the crew would be allowed beyond the pier.

During a briefing from the Pentagon Thursday morning Modly said nearly 1,000 sailors have now left the aircraft carrier and with a few days that number would climb to 2,700.

And 93 sailors have tested positive for COVID-19 which is more than the 77 Guam residents who have caught the coronavirus to date.

“There are less than 100 personnel who have tested positive so far. None of them are seriously ill and none of them has been hospitalized to date. Currently, the numbers are we have 93 positive tests; 86 exhibiting symptoms and 7 without symptoms,” Modly said.

About a quarter of the crew of nearly 5,000 have been tested, said Modly. Not all the tests results are in but as of Thursday morning, 593 tests had come back negative.

At a news conference Thursday afternoon at the governor’s office, Joint Region Marianas Commander Rear Admiral John Menoni said that those sailors who tested negative will soon be heading to various unnamed hotels on Guam.

“Over the next 12 to 24 hours, we plan to move the first group of COVID-19 negative asymptomatic TR sailors to commercial lodging for quarantine in accordance with the governor’s order and CDC guidelines. Sailors will only be permitted to depart the base following a negative COVID-19 test result and they must remain in quarantine in their assigned rooms for the duration of the mandatory 14-day quarantine.

Not all sailors will be leaving the Roosevelt. Modly said that the Navy can not and will not remove all the sailors from the ship.

“This ship has weapons on it, it has munitions on it, it has expensive aircraft and it has a nuclear power plant. It requires a certain number of people on that ship to maintain the safety and security of the ship,” Modly said.

All areas of the ship are undergoing deep cleaning, said Modly, to get rid of any traces of the virus.

“I would also like to emphasize that if the ship needs to go, if there is a crisis, the ship can go. That’s part of the reason why we’re maintaining the skills on the ship that we need if we have to move it in case of an emergency,” Mod;y said.