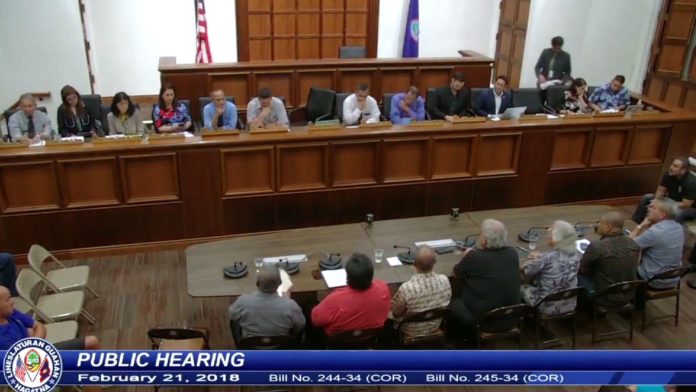 Guam – For most of the day yesterday (Weds.) the legislature’s public hearing room was filled with GovGuam employees all testifying in opposition to the proposed rollback of Hay raises in bill 244. During last night’s hearing only a few members of the private sector spoke out in opposition to the 2 percent increase in Business Privilege Taxes as proposed by bill 245 and in favor of cutting government fat.

There were three hearings scheduled for bills 244 and bill 245 yesterday(Weds.). One hearing was held in the morning, one was held in the afternoon and one was held in the evening. Bill 245 would raise the Business Privilege Tax by 2 percent to make up for the loss of revenue GovGuam will incur due to the Trump tax cuts. Bill 244 would raise the BPT by only 1 percent and then rollback GovGuam hay raises to make up for the Trump tax cuts. During the first two hearings the overwhelming majority of people who testified were GovGuam employees who testified in opposition to bill 244 and any proposed rollback of raises instead favoring bill 245.

However, during the last hearing, members of the private sector spoke out against bill 245 and any proposed increase in taxes. “I watched the proceedings today as an endless parade of administration officials came through these halls to advocate for the eleven thousand employees who work for the government of Guam. And I don’t want to minimize their efforts, but I want to speak today for the 55 thousand employees who don’t work for the government of Guam. The majority of whom are in lower paid service type jobs that have no benefits,” said private citizen Ken Leon Guerrero. Leon Guerrero says it is the private sector employees who will feel the brunt of the Trump tax cuts or any increase to the BPT’s. Instead of raising BPT’s Leon Guerrero says GovGuam really needs to trim the fat. “I saw a bunch of directors parked at a restaurant. I saw these luxury SUV vehicles with Government of Guam license plates. I’m a retiree on a fixed income. I drive a 15-year-old pickup truck. And I’m looking over here at all these people coming through crying poor as they get into their government paid luxury vehicles with their government credit cards that were there at shell. So, for the governor to claim there is no fat left to cut I beg to differ,” said Leon Guerrero.

Darryl Taggerty testified in opposition to both bills because of their proposed increases to the BPT. Taggerty like Leon Guerrero says GovGuam needs to cut the fat. This is something he says should have been looked at over the years by each legislative committee chair. “For too long oversight chairman have used their positions instead to cultivate favorable voter constituencies within the agencies. If committee chairs had been doing their jobs they would already know where to cut or where to reorganize,” said Taggerty.

Local business owner Sanjay Dewan spoke in opposition to both raising any BPT’s or GRT’s and rolling back raises for GovGuam employees. Dewan says any increase to the GRT will result in an even greater and disproportionate increase to consumer goods and services because he says businesses will simply overcharge. “So, what happens is businesses gouge money okay as being part of the business community,” said Dewan adding, “So, the island is gonna suffer. The people will suffer because businesses will not just pass a two percent increase, but they will actually tack on more which you will not know exactly what it is.”

Instead Dewan proposes using a visible sales tax so that businesses can’t take advantage of the invisible Business Privilege Tax or Gross Receipts Tax that consumers can’t see. “The consumer knows exactly what he is paying. So, the price of the product at the grocery store or any restaurant or establishment stays the same. All the business does is tack on your six percent tax, sales tax, or seven or eight. Do whatever you want. Raise it because the consumer has confidence that they know how much more is going to the government,” said Dewan.