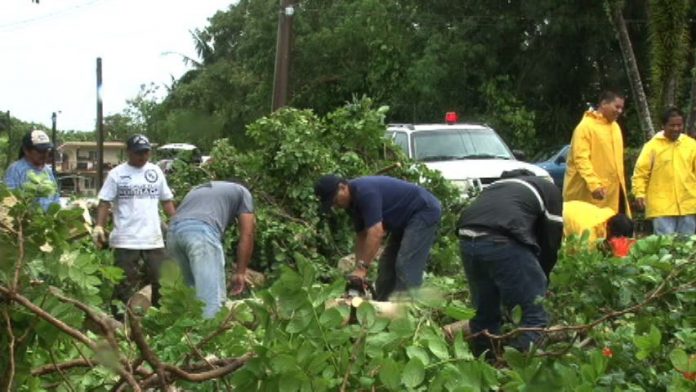 Guam – Fortunately for Guam there was relatively minimal damage from Vongfong. However the North did get some strong winds with some gusts clocked up to 70 miles per hour. We checked in with Yigo Mayor Rudy Matanane.

Yigo Mayor Rudy Matanane says that some of his crew have been up since yesterday clearing the roads of debris like this tree that blocked off an entire street in Yigo. Yigo resident Bob Dorion called the mayors crew this morning to remove the tree. “How did you and your family do during the typhoon were you guys safe and sound? Well we feel good that the power is on the whole night and when I wake up about 3 o’clock this morning I just looked out and the wind is blowing and well it’s not really that bad but a lot of banana trees fell down at my neighbor and this big tree that blocked the road,” said Dorion.

Other than some downed trees Mayor Matanane says most of the flooding and damage to his village was minimal.

he did however have to a move a family of 17 into a shelter in the early morning hours. “I had to get three pickups and a sedan to go pick them up and transport them when the wind was at it’s peak last night,” said Mayor Matanane adding, “kind of putting my people in danger. I mean we’re here to help assist but please you know just do it the right way and don’t wait until the storm is at it’s peak.” Mayor Matanane urges the public to check into shelters as soon as possible to avoid putting rescue workers and mayor’s staff in danger.