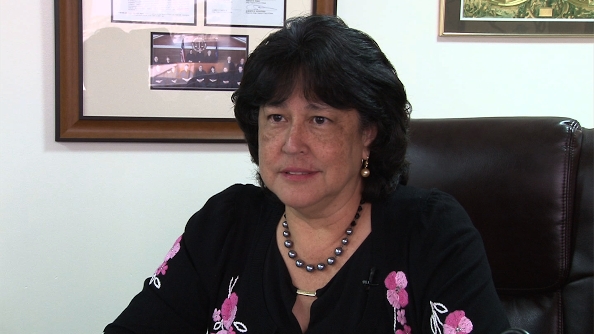 Although Governor Eddie Calvo has specifically ordered the “deportation” of criminals like Ninton Hauk via an Executive Order the Attorney General says Calvo is not technically deporting them but rather commuting their sentences as only the federal government has the authority to deport people.

Guam – Although Governor Eddie Calvo has specifically used the word deport in his executive order he does not have the ability to deport compact migrants. Instead it appears that he is brokering deals with criminals in which he commutes or lowers their sentence in exchange for the promise that they never return. Is this even enforceable? The Attorney General of Guam says she’s not sure.

In his executive order the Governor cites residual authority “to enforce the immigration laws of the United States in default of performance by the immigration and naturalization service of the United States.” However the A.G. points out that, “and the Governor in the executive order was using a 64 year old court case and it has no application today. So I’m putting this concept that the Governor has residual deportation authority I’m putting that to the side and indicating that I don’t agree with him at that.”

The Attorney General instead believes that the Governor only has the authority to commute or lessen the sentences of inmates. “The Governor said I will commute your sentence on condition that you leave Guam and never return so that then to me became like a contract an agreement with the inmate,” said the A.G.

The problem is it’s not clear if this agreement is even enforceable. This is something the A.G. is currently looking into. “That’s actually what I’m looking at right now. I’m going to be meeting with the Chief of Customs the Director of Customs and to see whether the Governor’s office has given that agency any guidance,” said Barrett-Anderson.

In essence this poses the question as to whether or not the Governor of Guam has the right to ban an immigrant from re-entering not just Guam but the entire U.S.

It’s these types of questions that has the A.G. concerned about GovGuam’s liability. “You mentioned that you don’t want it to come back and bite us in the hand in what way could that happen?” asked PNC. “A lawsuit. A lawsuit filed from many different directions and part of what I do here as Attorney General is defend the general fund defend our coffers against lawsuits,” said Barrett-Anderson.

The Attorney General says that she will look into this entire issue and if she finds that there is something that may be unenforceable she will recommend that the program be suspended.