The former chairman of the governor’s Physicians Advisory Group wants the federal government to study the so-called “Guam conundrum” — a situation wherein Guam has a high vaccination rate but also a high breakthrough and hospitalization rate.

Dr. Hoa Nguyen wants the US Centers for Disease Control to go to Guam and investigate COVID-19 here as a unique case study.

“So the question is, why are we so much different than the states? We can think of multiple reasons. but we just want to confirm that suspicion of why we have some really high rates of breakthroughs and hospitalizations. We are still in the triple digit cases now and we shouldn’t be. It’s already been three months. In the states, the delta variant is already burning out and the virus is decreasing in many areas. So what are we doing differently here?” the doctor asked.

He added: “And it’s not just the elderly, but also the younger population. People that are 20 to 30 years old who are fully vaccinated still have breakthroughs,” Dr. Nguyen said.

The government’s health experts, however, do not agree with Dr. Nguyen.

Dr. Ann Pobutsky, during her media briefing last week, said she doesn’t think Guam’s breakthrough cases are anything extraordinary that the CDC should study.

Dr. Annette David added that in vaccine dynamics, higher breakthroughs are expected the more you vaccinate.

She added that as we vaccinate more people, more breakthroughs will happen.

“But what you need to look at is not the breakthrough rate as much as the hospitalization rate because that’s going to affect your healthcare system, and who’s dying. And when you take a look at those indicators, it is still happening predominantly in the unvaccinated. So I don’t think there’s anything unusual about the breakthroughs. It’s to be expected with vaccine dynamics,” Dr. David said. 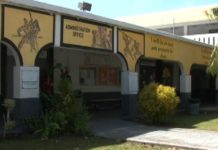 DPHSS: Omicron variant may already be on Guam By G