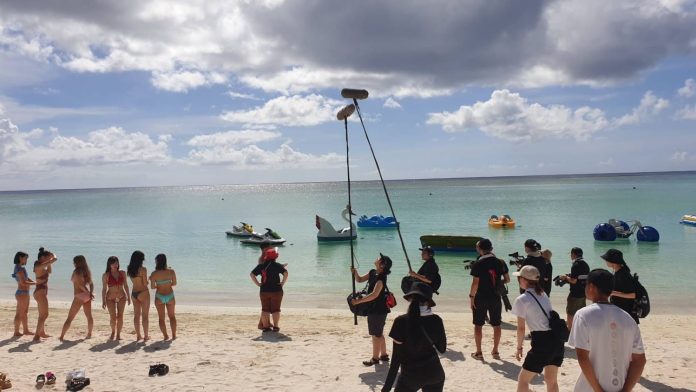 A Japanese Reality Tv Show Filmed on Guam Looks to help Promote the Island as a Tourist Destination Spot.

With the gradual re-opening of the island and the recovery of the tourist industry, RYG Company INC. believes that media presence and exposure are critical at this point in time.

According to Guam International Media Coordinators Association Manager – Dave Duenas, “The media scene looks to promote Guam and provide free advertising on the return of the tourist industry.”

Abema TV, one of Japan’s top-rated private streaming cable networks contacted RYG Company INC. on a partnership with Top Scene, INC. to produce a “Reality tv show” on the island. In an interview with PNC, Top Scenes Producer, Masaki Kamijo translated by the President of RYG Co. Jerry White said that this offer would provide an opportunity to showcase the island for a whole season of the upcoming reality tv show.

Due to the pandemic decreasing international travel rates, Guam and other countries that have an economic reliance on tourism were affected drastically.

After two years since the pandemic hit the world, most of Guam’s community are hoping to benefit from a healthy return of the tourism industry.

For the filming of this reality TV show there were multiple locations that were being contested for filming including hawaii, thailand, and okinawa but due to Guam’s covid situation Top Scene’s producer felt Guam was the right choice.

Abema Tv’s Public Relations Officer Asaha Okubo arrived with the production crew as a first timer. Jerry White roughly translated that for her first time she was amazed by the spectacular scenery that Guam provides and the hospitality of the locals have made her feel welcomed.

According to Abema Tv 2022 statistics, Abema Tv accumulates around 18.25 million weekly active users with over 73 million downloads. They host some of japans popular series like the top rated anime Demon Slayer.

With this data the following reality tv show could possibly bring attention to Guam when viewers watch the anticipated season 2 and feel the same sort of emotion and excitement that Okubo felt as she travelled.

While GVB didn’t directly have a hand with the efforts made by RYG Company Inc, Top Scene Productions and Abema Tv.

According to Regina Nedlic, GVB’s Japan Marketing Manager – the Production company are part of the overall tourism recovery efforts for Guam.

GVB did assist with the coordination of shooting locations around the island and helped with the free PCR testing program for the visiting cast and crew.

Much work is being conducted as Japan slowly eases back its restrictions and GVB ramps up its marketing promotions and meetings with airlines and travel trade to stimulate new growth in the market.

Furthermore, GVB said that they look forward to more positive news coming out of Japan in the summer season.