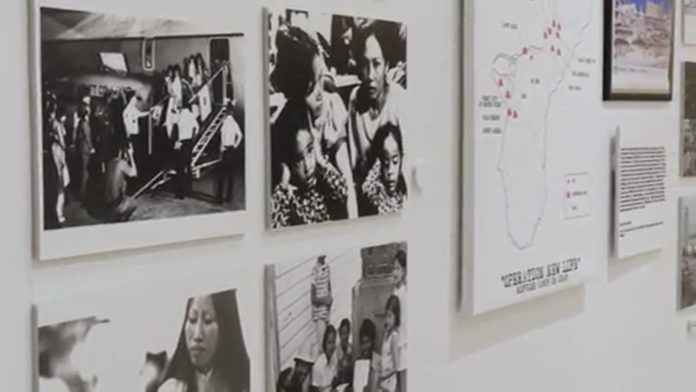 The Remember Saigon exhibition is based on Dr. Evyn Lê Espiritu Ghandi’s research and explores Guam’s relationship with Vietnam. Ghandi said, “This exhibit is focused on some of my research that I recently did for a book that I published. And it really wants to look at Guam’s unique connection and role with Vietnam both during the Vietnam war as well as Operation New Life. ”

One of the many families affected by the Vietnam War is John Leddy Wusstig. He shares a photo of his grandparents and their son at the exhibit.

John Leddy Wusstig said, “This photo, with my grandparents, were interviewed in 1987 about their son who went missing in 1962. He was aboard the Flying Tigers Flight 739.”

When asked about how the war affected his life, he said he and his brothers were too young to be drafted, but getting the answers to how his uncle went missing was a big concern.

John Leddy Wusstig said, “I wasn’t old enough to be drafted, and neither were my older brothers. The draft had ended, but I mean the war itself would basically with the plight of my uncle to try to get him back or find some answer as to why the plane disappeared.”

PNC also asks one of the guide volunteers, Max Ronquillo, about the exhibit. The artifacts come from the University of Guam’s Micronesia Area Research Center, Agana Library, and various archives.

Ronquillo said, “We have some original paintings; we do have some images that are from different archives. The main one is here from the University of Guam Micronesia Area Research Center, the Agana Library, and then also the national archives. ”

Ronquillo says that Guam had a major role in the Vietnam War. He stated, “The whole island came out to open their arms up to these people who just got this place by war.” He added, “People don’t know Guam played a big role, not only physically but also with the service members. We’ve got a lot of CHamoru service members that served in the war that are still alive.”

Remember Saigon: From Vietnam to Guam is located on the 1st floor of the Tumon Sands Plaza. It is open through September 15, Tuesdays through Sundays from 12 pm – 6 pm. This exhibit is free and open to the public.