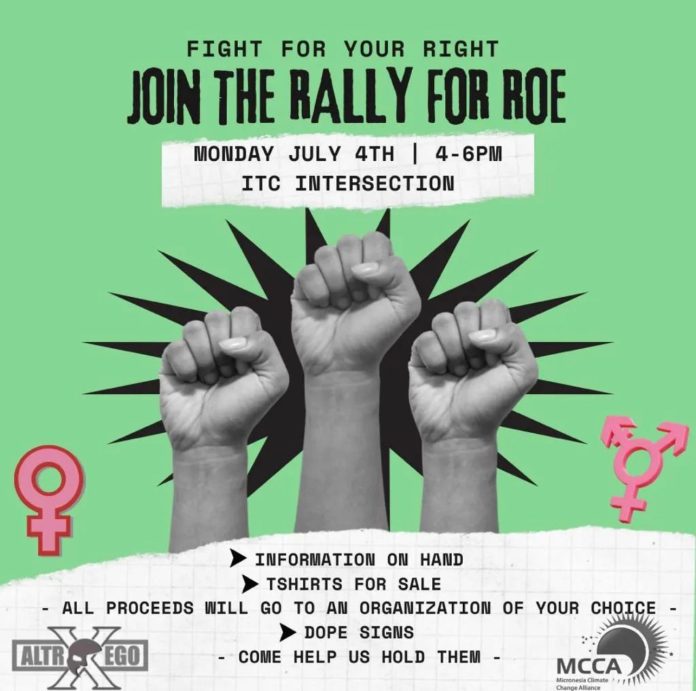 A protest against the recent overturning of Roe V Wade, titled Rally for Roe, is scheduled for tomorrow at the ITC intersection.

Yesterday, a rally for the overturning of Roe V. Wade was supposed to take place but unfortunately due to unforeseen weather conditions it has been postponed to Wednesday from 4-6 at the ITC intersection.

The purpose of hosting a rally on the 4th of july was to highlight the injustices over reproductive freedom on a day where most commemorate liberty and freedom in the U.S.

Last weekend, Roe V. Wade, a landmark decision of the Supreme Court made about 50 years ago, was overturned.

In an interview this morning with NewsTalkK57’s Patti Arroyo, Jayne Flores, The Director of the Bureau of Women’s Affairs gave her comments about the overturning of the 49 year old landmark decision.

Jayne Flores, Director of the Bureau of Women’s Affairs stated, “It is frightening that our daughters now have less rights with regards to control of their own bodies than you and I did when we were younger, that is a frightening thought that our country is actually going backwards instead of forward.”

In response to the overturning, many people took to the streets in protest nationwide. Now the people of Guam are taking part in those protests as well.

Individuals can expect a large number of people to participate in tomorrow’s protest including the Bureau of Women’s Affairs, Famalaoan rights as well as signs and t-shirts available for sale with the proceeds of those going to an organization of the buyers choice.