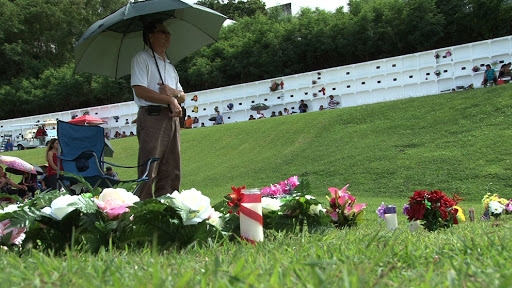 All Souls’ Day at the Veteran’s Cemetery in Piti commemorates those that have paid the ultimate sacrifice.

Guam – All Souls’ Day is a time to reflect on the passing of loved ones, but for some, it’s also a time to recognize the great sacrifice of those who have served our country.

Across the island, Catholics and faithful followers flocked to loved ones’ graves in commemoration of All Souls’ Day.

For the Sahagon family, it was a time to do just that.

Tish Sahagon, the sister of fallen veteran Angelo Sahagon, who served in the air force, says they have been at the grave site of her brother since 11 this morning, a few hours before the ceremony began.

The Sahagon family adorned his grave site with flowers, candles, and even a lighted cigarette.

“We’re here for my brother. He passed away in 2000 and we kind of plan around it because we came from Our Lady of Peace from earlier.”

There were several in attendance at the Veteran’s Cemetery this morning, with a few notable attendees such as Senator Tommy Morrison and Senator Frank Aguon Jr.

According to Joey Duenas, the Interim Administrator of Catholic Cemeteries, All Soul’s Day is also a time to celebrate community.