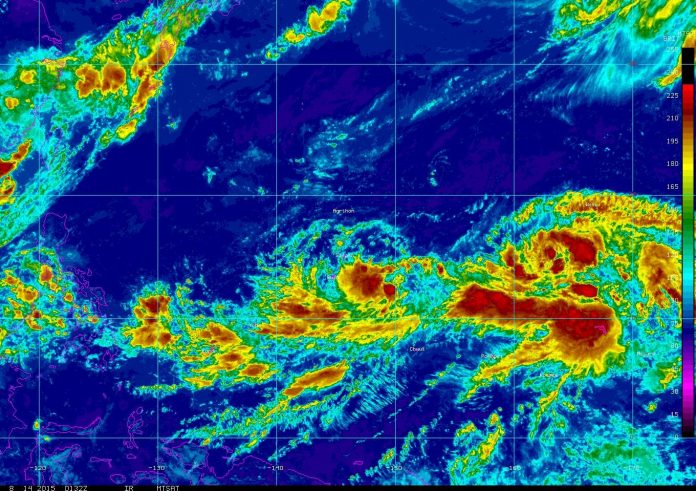 Two circulations are now the subject of a tropical cyclone formation alert by JTWC one could become a typhoon and could pass close to Saipan by late Sunday or early Monday morning with typhoon strength winds.

Guam – The National Weather Service released a Special Weather Statement on two tropical disturbances saying that they are now the subjects of tropical cyclone formation alerts by the Joint Typhoon Warning Center.

The first disturbance–formerly labelled as an Invest Area 97W–was only about 340 miles southeast of Saipan and about 350 miles east-southeast of Guam as of 10:30 AM (CHST). NWS forecaster Brandon Aydlett told PNC that it has now been officially labeled as a tropical depression and it could become a typhoon by the time it passes through the Marianas late Sunday or early Monday morning. It’s expected to pass just North of Saipan but these forecasts can quickly change. In it’s statement, the NWS said that the circulation was moving west-northwestward with a forward speed of about 8 miles per hour.

Currently computer models are not agreeing well with the forecast track or the intensity of the this circulation. The Weather Service comments, “The system is encountering substantial upper-level shear which will limit the short-term development,” in explaining this inconsistency in models; but in general it is expected to slowly gain it’s strength over the next couple of days and pass through the northern Mariana Islands sometime around this Sunday or Monday.

The second circulation which is northwest of Kwajalein is also the subject of a tropical cyclone formation alert by the JTWC. However NWS expects this system to remain to the east of the Marianas even as it continues towards northwest over the next few days.