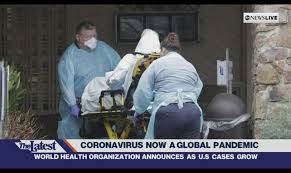 (ABC News) – A virus outbreak that began in China nearly three months ago has now infected more than 1,000 people in the United States and killed 36.

The World Health Organization declared the virus a “pandemic” during a news conference in Geneva Wednesday.

More than 120,000 people have tested positive for the novel coronavirus, still mostly on the Chinese mainland, according to data provided by the Center for Systems Science and Engineering at Johns Hopkins University. But that proportion is shrinking by the day as the epidemic is appearing to subside in China while cases spike elsewhere, especially in Europe and in the Middle East.

The newly identified virus, known officially as COVID-19, has tightened its grip around Italy and Iran, which have the second- and third-highest national totals of confirmed cases behind China, respectively. With 1,037 cases confirmed as of early Wednesday morning, the U.S. now has the eighth-highest.