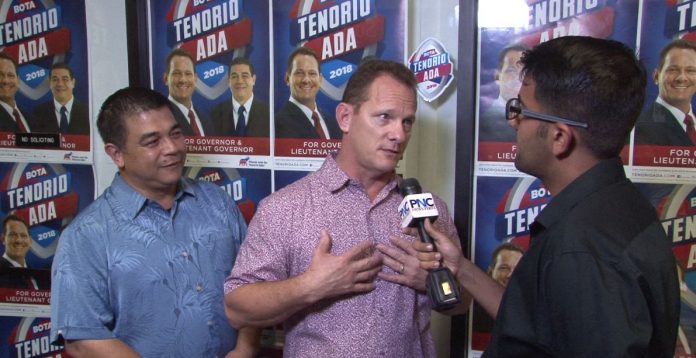 Guam – While the “I’m IN” team is confident of victory, the BOTA team of Ray Tenorio and Tony Ada are waiting patiently for the tide to turn.

In the early morning hours of Wednesday morning, gubernatorial hopeful Ray Tenorio urged his supporters to be responsible and go home. Citing his concern for the health and welfare of his supporters as well as public safety, the candidate was not acknowledging defeat rather simply being a responsible candidate. 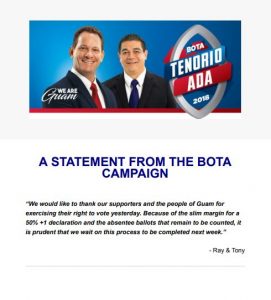 As Tenorio told PNC after telling his supporters to get some rest and tend to their responsibilities, he is confident his campaign will prevail in the end. Shortly before noon yesterday, the BOTA camp released a statement saying “We would like to thank our supporters and the people of Guam for exercising their right to vote yesterday. Because of the slim margin for a 50% +1 declaration and the absentee ballots that remain to be counted, it is prudent that we wait on this process to be completed next week.”

As the BOTA team anticipates a possible run off, PNC asked Tenorio what his plans are in order for his campaign to come out victorious. Tenorio states that they are going to appeal to whoever those voters are that did not support either the BOTA team or the I’m In team and reach out to them to listen to whatever ideas and concerns they may have and try to address them. “The people when they vote, they vote for the individual that they think will be able to carry out their dreams, their wishes and the problems that they have, and see them resolved.”

Late in the afternoon, the Aguon Limtiaco team issued a statement as well stating that they are not quite ready to concede yet either, pending the results of the absentee, homebound, and provisional ballots.

Around 3 P.M. yesterday both the Democratic Party of Guam and Citizens for Public Accountability, one of the Political Action Committees that played a role in the Believe write-in campaign, put out statements legitimizing the victory of Lou Leon Guerrero.

In the statement from the Democratic Party of Guam, claiming that morning has broken the release goes on to state that “History was made today in the U.S. territory of Guam. Voters elected the island’s first female Governor, first openly gay Lieutenant Governor, and, for the first time in the island’s history, women will outnumber men in the Guam Legislature. In fact, in the coming term, it is likely that all three branches of government – to include the judiciary – will be headed by a woman.

10 of the 15 Senators in the upcoming 35th Guam Legislature will be women – and most of them Democrats. Democrat Lourdes “Lou” Leon Guerrero captured 51% of votes cast in a three-way contest for Governor, beating the sitting Republican Lieutenant Governor and a write-in candidate and longtime Senator. Leon Guerrero’s running mate Joshua “Josh” Tenorio will become the island’s first ever openly Gay Lt. Governor.”

One of the most outspoken critics in this election was Ken Leon Guererro. Mr. Leon Guererro represents citizens for Public Accountability. Today in their statement, it goes on to state that “Guam’s New Era Begins – Our government is a government of the people, and our people have spoken. So today, I congratulate Lou Leon Guerrero and Josh Tenorio on their successful campaign for the sacred privilege of leading the people of Guam into the future.”

Only time will tell if the prophecy of Lt. Governor Tenorio will be fulfilled.

Late in the afternoon, the Aguon Limtiaco team issued a statement as well stating that they are not quite ready to concede yet either, pending the results of the absentee, homebound, and provisional ballots.