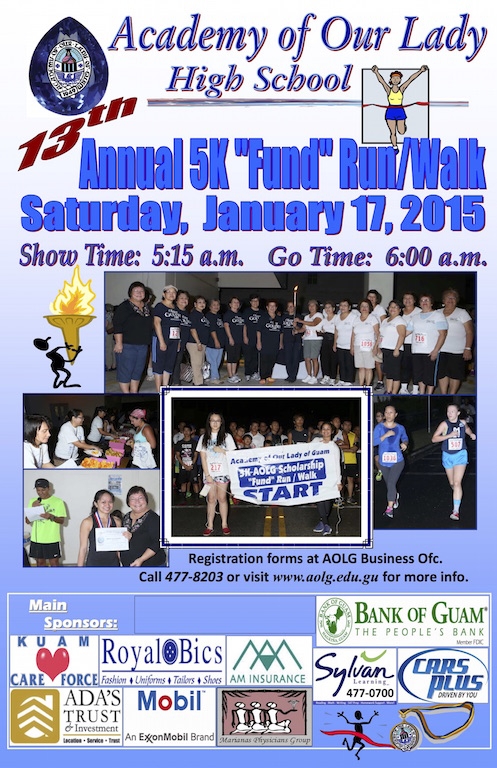 The Academy of Our Lady of Guam High School (AOLG) will be holding its thirteenth annual 5K “Fund” Run/Walk on January 17, 2015. Everyone is invited to participate in this worthwhile, very fun “fund” run, and what promises to be a memorable, exciting, and healthy public event. Proceeds from this event are earmarked for scholarships and tuition assistance. Our local community along with the school’s students, alumnae, families, and friends are invited to help ring in the new year, get fit, and help celebrate the 50th Anniversary of the Golden Jubilarian Class of 1965 as well as continue the school’s celebration of its 65th Anniversary.

The Academy, established in 1949, graduated its first class in 1953. Since then, more than 5,000 women have made Academy their second home as young women. Today, these graduates continue to be active in our community as well as leaders in our society both locally and globally “making a world of difference”.

Academy’s annual 5K, held in honor of and dedicated to the graduating class celebrating their 50th class reunion, the Class of 1965, will open both on foot and in a trolley alongside the many Academy alumnae present. The event will begin with warm up at 5:30 a.m., followed by a “Moment of Silence” in memory of the alumnae who have gone before us, then the traditional “Passing of the Torch” from the Class of 1964 to the Class of 1965, and finally culminating with the start of the race promptly at 6:00 a.m..

The course will run through the streets of Hagatna’s historical trail with the starting point between PDN and the school on Archbishop Flores Street. “Show time” is 5:15 a.m. with “Go time” at 6:00 a.m.. Certificates and medals will be awarded to top finishers in the “General Categories”. In addition, the alumnae class with the most attendance will be awarded the “Most Spirited Class” AOLG Alumnae Class. Registration forms are available at AOLG Business Office, AOLG Website—www.aolg.edu.gu, and Royal Bics. The entry fee is $10 per person prior to race day or $12 per person if you register the morning of the race. Registration the morning of the race will be held under the school’s gym. Great door prizes will be drawn for those present and whose race numbers are called.

Parents, alumnae, and the entire community of Guam are encouraged to help out and join in the fun! Main sponsors for Academy’s 13th Annual 5K include KUAM CareForce, Royal Bics, Ada’s Trust & Investment, AM Insurance, Bank of Guam, Mobil Oil Guam, Inc., Delta Airlines, Marianas Physicians Group, Sylvan Learning Center, and Cars Plus. If you are interested in helping out the school with this event or would like more information regarding the AOLG 5K “Fund” Run/Walk, please call the school at 477-8203. Join the Academy family on January 17th and enjoy the early morning with a brisk walk/run or ride the “trolley” along the streets of Hagatna and celebrate with the Academy!

Course: 3.1 Miles with start and finish line adjacent to Academy of Our Lady School, Hagatna