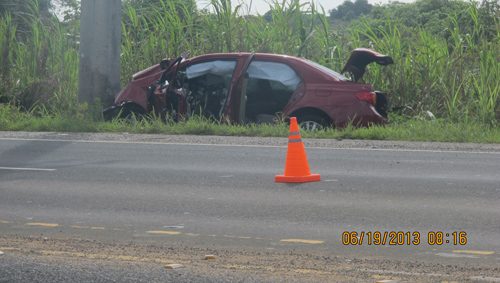 Guam – A man is in critical condition at Guam Memorial Hospital after the car he was driving struck a concrete power pole in Dededo Wednesday morning.

AS of 10:30 am,  GMH  Nursing Supervisor Joe Eustaquio says the man was still in the Emergency Room being treated. She could not provide details about his injuries.

It happened about 8am. A red 4 door sedan slammed into a concrete power pole on Route 3 just off Marine Corps Drive in Dededo and across from the new hospital construction site.

Acting Guam Fire Spokesman Lt. Phil Camacho says that the man had to be extracted from the vehicle. He was unconscious, but breathing on his own and no CPR had to be performed. He “appeared to have possible multiple fractures [to his]  lower extremities” said Lt. Camacho in a text message to media.