Acting Department of Corrections Deputy Director Joseph Carbullido issued a memo Tuesday to all prison staff advising them that he is now in charge of all prison operations.

After the memo was leaked to the media, the administration issued a statement advising that Samantha Brennan was still DOC director, but she’ll be concentrating on hiring new staff.

In the memo, Carbullido wrote that he will now “oversee and be responsible for the operations of the Department of Corrections with the advice and recommendations from the Warden and Command Staff.”

The memo is signed by Carbullido and by Samantha Brennan who signed as the DOC Director under the word “Concur.”

Soon after the memo was leaked to the island’s media this morning, the Leon Guerrero administration’s Director of Policy, Carlo Branch, issued a statement explaining that  Brennan “remains the head of DOC” and “this memo merely outlines the division of administrative and operational duties within her management team.”

“The Director’s immediate focus is resolving personnel shortages through the expedited hiring of 40-60 officers by the end of the year and the payment of overtime,” wrote Branch.

Branch said the memo was signed by both director Brennan and Acting Deputy Carbullido which he said shows “they are both united in accomplishing the same mission.”

The memo also states that the Special Operations Response Team (S.O.R.T.) will be “reinstated to ensure the safety and security of all personnel.” And DOC staff “shall not work more than sixteen hours per day … “

Long work hours and the elimination of the SORT unit were major complaints made to Gov. Lou Leon Guerrero last week when she met with DOC employees.

They both were also among the issues listed in the federal and local complaints filed by GFT union representative Robert Koss.

Koss agreed to withdraw those complaints last Friday after meeting with the governor and agreeing to let her handle the issues raised by DOC employees.

This morning Koss issued the following statement in response to Carbullido’s memo: “We are glad to see there is some progress. With so many concerns remaining, we will continue our efforts to work closely with management and the administration to resolve all safety issues affecting employees at DOC.” 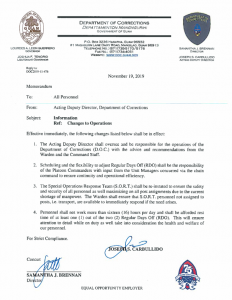