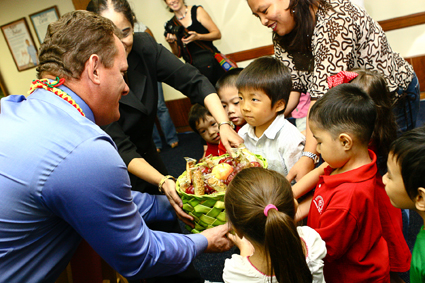 “The Montessori Method of Education is a valuable and innovative educational resource for preparing our children with the skills needed for their bright futures. … The goal of the Montessori Method of Education is to promote the ‘Cause of the Child’ by providing an educational environment that helps children to acquire the confidence, motivation, and skills needed to fulfill their potentials and achieve their goals in life,” the proclamation reads.

Children ranging from ages three to nine years started the event with a recital of the Star Spangled Banner, Guam Hymnal in Chamorro and a Hello song. The Hello song was presented in four different languages — French, Spanish, Japanese and English. At the end of the proclamation signing, the kids gathered to sing a farewell song that they also did in sign language.

“One of the things that makes the Montessori Schools of Guam unique is its small class size,” said Acting Governor Tenorio.

“Social workers bring voice to the community and are doing God’s work,” said Acting Governor Tenorio. “On behalf of myself and Governor Eddie Calvo, we thank and commend you for dedicating your service to our people.”

“When I retired 10 years ago, I was recognized by the Professional Social Workers and it is something that I proudly display in my office,” said Acting Lt. Governor Cruz, a strong advocate for social workers. “Not everyone can have the heart for the work that you do, and I am very proud of you all. Please continue the work that you do.”

“Professional social workers care for those left behind or for those who have lost their voice. This profession was established more than 100 years ago to help Americans overcome poverty, illness, addiction, abuse, discrimination and other adversities to reach their full potential. Guam benefits from the countless hours of commitment by professional social workers. They work tirelessly in agencies, hospitals, hospices, schools, universities, legislatures, private practices, corporations, and the military,” the proclamation reads.