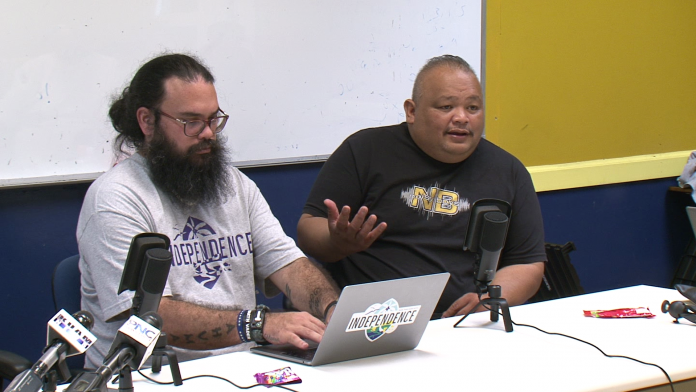 Guam – It’s not just about the sport, although that is a large part of it. Whether you agree with the cockfighting or not, advocates say a federal ban symbolizes an even deeper problem: colonialism.

CHamoru rights activist Michael Bevacqua hosted a podcast Sunday at the University of Guam covering the topic of cockfighting and the federal ban recently enacted. The ban was part of the Farm bill signed into law by President Trump that provides hundreds of billions of dollars in aid to farmers and agriculture. But somehow, the ban on cockfighting in the territories was snuck into the language of the law.

And now this ban will take effect one year from now to the detriment of those in the cockfighting community as many say the ripple effect will be wide and far reaching, especially for those who use it as their bread and butter.

“I believe they’re selfish because you’re just gonna yank that out, you know. How many lives you’re gonna affect? How many people is gonna be affected? Tens and thousands of chicken come our way at $300 to $500 a chicken. You’re gnona hurt the people in the states also, you’re gonna hurt our feed stores,” says Frank Taienao. “There’s gonna be a lot of people put out of business, there’s gonna be housing being taken away, there’s gonna be cars being [repossessed] because [cockfighting] has been in their lives since day one.”

Taienao is a cockfighter from Umatac who’s been involved in the sport since he was 10 years old. A long held tradition in his family, Taienao says, as a kid, the sport kept him out of trouble and taught him discipline.

More than just the economic loss, Taienao says making cockfighting illegal will just drive it underground which will lead to more crime.

To the naysayers who cry foul over animal cruelty, cockfighting backers say that assertion amounts to discrimination.

“You have to pack the horse, you have to kick it with spikes for them to jump, you gotta train them to do that,” he adds.

“We feed them every day. We give them the best that they can get every day. The only time they really suffer is when they’re out there in the pit, but they die–I mean you know it’s faster them dying with a sharp knife, than you choking the neck to cook them,” notes another cockfighter, Edward Chaco, who says the sport has been in his family for generations.

Bevacqua meanwhile, says there’s evidence of the sport’s pre-colonial existence. Chickens are not native to Guam but pre-Spanish Chamorros were said to have used pigeons for bird fighting. And now with this ban, Bevacqua says the federal government is once again flexing its muscle against the people of Guam and infringing on our rights.

“What if they decide to come in and tell us something else? What if they decide to come in and basically say that you can’t fish, ‘talaya’ fishing, anymore?” says Bevacqua. “This is larger than a discussion about the cockfighting itself. So people who focus on it because they don’t agree with cockfighting out of moral issues, that’s not the point. The point is, no one on Guam, whether you support it or not, got a chance to speak or have any power on this issue,” Bevacqua says.

Bevacqua encouraged stakeholders to lobby lawmakers into taking action. Carlos Camacho also said during the podcast that Senator-elect Tina Muna Barnes is looking into the possibility of legal action as there may be a loophole in the law that would allow for cockfighting’s continued practice on Guam.