Guam –  Guam Police have arrested a suspect in the armed robberies of the Lucky Land and E World game rooms.

Adam Rebeta Bautista was booked and confined Friday on charges 2nd Degree Robbery (2 Counts), Conspiracy to Commit Robbery, use of a Deadly Weapon in a  Commission of a Felony (2 cts), Guilt Established by Complicity.

On Saturday he was formally charged in Superior Court with second degree robbery.

His alleged partner, Fred Quinata, has also been charged for the robbery.

According to the Magistrate complaint, Bautista admitted to committing both the Lucky Land and the E-World robberies.

According to the Magistrate complaint Bautista “stated that on January 2, 2014, he received a call from his friend, Fred Quinata, about doing a mission. The two met at 2000 hours that night and smoked “ice.” Then they talked about planning to rob a game room, Lucky Land. At 0100 the next morning, they drove by Lucky Land to check to see that the establishment did not have too many patrons. Defendant and Quinata exited their vehicle, a Black Nissan pickup truck.”

“Quinata had a samurai sword and Defendant had a pellet gun. Both their faces were covered with t-shirts. Once inside, Quinata went straight for the cashier’s box while Defendant remained in the doorway and pointed his weapon at people. He instructed the patrons to get on the floor and not to move. The two retrieved the money and fled. Defendant stated he got $1,500 as his portion of the robbery.”

Guam police have previously said that the E World Game Room in Mangilao  was robbed about 11pm last Sunday, January 5th, by 2 men. One man was armed with a small caliber rifle and he stood by the door and ordered all the “patrons playing the liberty machines to get down on the floor and not move.”

The second suspect had only an umbrella which police say he “aimed the umbrella at the cashier like a rifle” and then proceeded to “empty out the cash draws.”

According top the Magistrate report: “Defendant also admitted that he and Quinata robbed the E-World Gameroom. He stated  that on Sunday, January 5, 2014, he received a call from Quinata about another mission. That evening, they planned to rob E-World. They once again smoked “ice,” then they drove in the
black Nissan pickup truck to E-world. This time, Defendant had the samurai sword and Quinata had the pellet gun. Defendant went for the cashier’s box and Quinata remained by the doorway.”

“After retrieving the money, the two fled on foot. Defendant said he left the sword by the game room, and then they removed their clothing and threw it in the area. Defendant stated they were able to get about $2000 from E-World, and that $1000 was his share.” 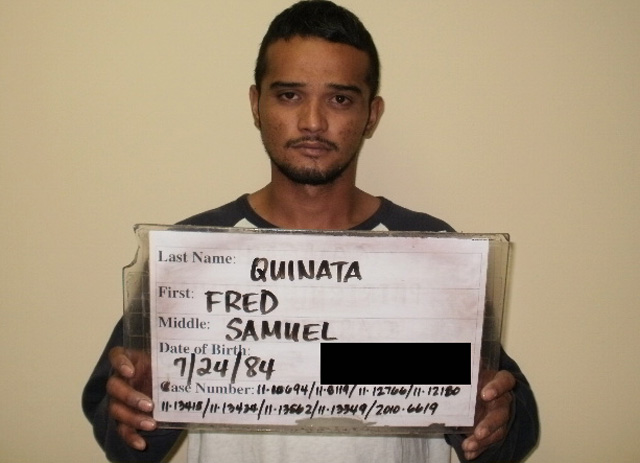