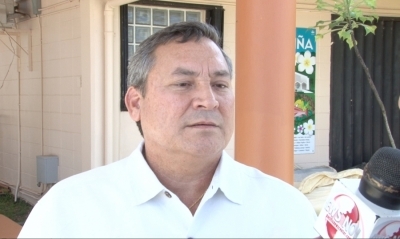 Aguon’s bill does not fully repeal PL 32-208 as it aims to only rollback raises for the governor, Lt. gov and senators.

Guam – While a veto from Gov. Eddie Calvo on Senator Frank Aguon’s bill 4 is inevitable, Adelup says they are looking into a potential legal matter with the pay raise legislation.

Bill 4 was passed last legislative session with a vote of 10-5 but Adelup and its legal team are reviewing the bill to find out if Calvo’s cabinet members will be affected if the bill is passed into law. When Senator Agues introduced bill 4, he also introduced bill 5, a companion piece of legislation that de links the governor’s salary to his cabinet members. Bill 5 was intended to allow for the governor to to set the salaries of his cabinet members should his pay be rolled back to 2014 pre competitive wage act levels. But bill 5 is stuck in committee while bill 4 is currently up for review at the governors office.

Meanwhile, Aguon says, “Public Law 32-208 is still in place and because that is inclusive of the cabinet members salary then because this bill 4 would only address the governor, Lt. gov, and the senators. The way i legally understand it is that cabinet members pay would remain as is because PL 32-208 is the most current law in the books aside from some of the previous provisions we were trying to clean up.”

Aguon’s bill does not fully repeal PL 32-208 as it aims to only rollback raises for the governor, Lt. gov and senators.