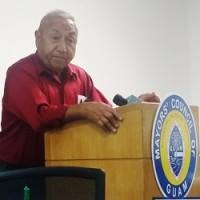 Guam – According to Adelup Guam Veteran’s Affairs Office Administrator Martin Manglona won’t be re-imbursed for paying some employees’ salaries out of pocket.

Governor’s Spokeswoman Oyaol Ngiririkl says several months ago Manglona requested to hire more people after having to let some employees go. However Ngiririkl says that while DOA was still processing the paperwork for some of these employees Manglona decided to start paying them out of his own pocket. Manglona told PNC that he’s been paying these employees salaries since January. In fact he says he’s paid $30 thousand dollars out of his own pocket for salaries and he’s even forked out $50 thousand dollars for maintenance costs since May.

“There was a point in time where he just felt like he couldn’t wait and so just paid folks out of pocket while we were still processing employees to get them on board,” said Ngiririkl.

Because he paid them before they were officially hired GovGuam can’t re-imburse Manglona.

Adelup says last month they hired 7 people at the Veteran’s Affairs Office who should now be getting paid. She says that the agency now has more staff than they’ve had for a long time.