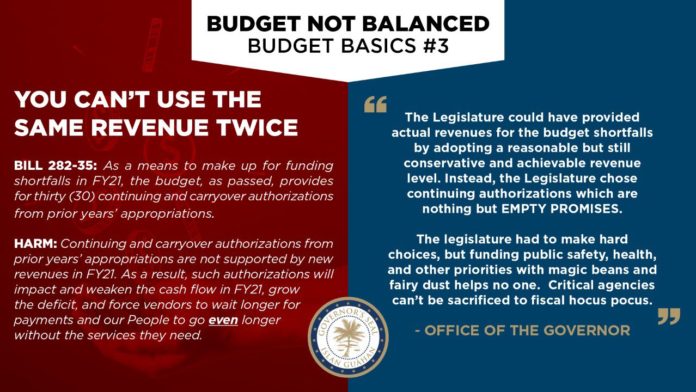 The Office of the Governor has issued the third installment of its “budget basics’ series, stating that as a means to make up for funding shortfalls in FY21, the budget, as passed, provides for 30 continuing and carryover authorizations from prior years’ appropriations.

According to Adelup, continuing and carryover authorizations from prior years’ appropriations are not supported by new revenues in FY21 and as a result, such authorizations will impact and weaken the cash flow in FY21, grow the deficit, and force vendors to wait longer for payments and our People to go even longer without the services they need.

“The Legislature could have provided actual revenues for the budget shortfalls by adopting a reasonable but still conservative and achievable revenue level. Instead, the Legislature chose continuing authorizations which are nothing but empty promises,” the Adelup release stated.

“The Legislature had to make hard choices but funding public safety, health, and other priorities with magic beans and fairy dust helps no one. Critical agencies can’t be sacrificed to fiscal hocus pocus,” the release added.