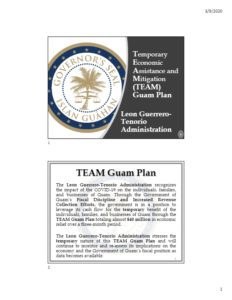 Governor Lou Leon Guerrero Monday unveiled a plan to help the island’s businesses survive the blow from the ongoing damage being done by the coronavirus.

The bulk of the plan amounts to a 90-day postponement of the Business Privilege Tax.

It’s been dubbed the TEAM Guam plan, an acronym that stands for Temporary Economic Assistance and Mitigation. It amounts to roughly $40 million in deferred taxes and lower fees.

The vast majority of it is an estimated $33 million in delayed BPT taxes.

Qualified businesses in good standing would be allowed a 3-month postponement on their business privilege taxes due on the 20th of April and the 20th of May.

Penalties and fees would be waived and GovGuam would have to bite the bullet until July and August when businesses would then have to make good on the taxes they owed three months earlier.

“We wanted to make sure that public safety, education, continue on without any interruption. We considered all that and because of our fiscal discipline and fiscal management, we have been able then to weather that storm … to absorb that to the end of the fiscal year. So right now there is no reduction in government services,” the governor said.

The Guam Power Authority and Guam Waterworks Authority have both agreed to consider payment plan options for residential customers.

The governor said that a reduction in the business privilege tax from 5 percent back to 4 percent is not under consideration and she is not planning on declaring an emergency or laying off or furloughing GovGuam employees. Tax refund payments will not be affected, she said.

The estimated financial blow to GovGuam from the damage done by all the coronavirus  cancellations during the final three quarters of this fiscal year is about $31.7 million, said the governor.

About three-fourths of that loss maybe be covered by the roughly $21 million in 2019 fiscal year revenues collected in excess of projects.  The Governor had wanted to use that money to pay down the $81 million deficit, but on Monday she acknowledged that won’t happen.

“We’re projecting a $40 million packet, right. It’s not set in stone … but this is what we’re thinking the cost is. You know it may change And also the impact may change,” the governor said.