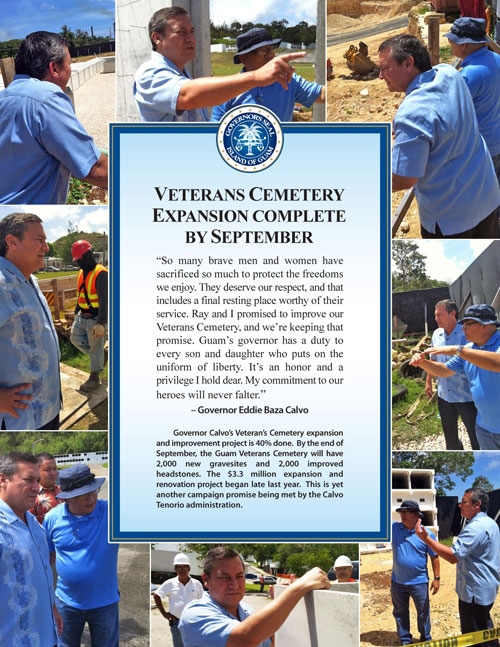 Guam – The Governor’s Office has announced that the work on expanding the Guam Veteran’s Cemetery is 40% complete.

According to a release from Adelup, there will be 2,000 new grave-sites, and 2,000 improved headstones by the end of September.

The release quotes the Governor as saying : “Ray and I promised to improve our Veterans Cemetery, and we’re keeping that promise.”

“So many brave men and women have sacrificed so much to protect the freedoms we enjoy.  They deserve our respect, and that includes a final resting place worthy of their service.  Ray and I promised to improve our Veterans Cemetery, and we’re keeping that promise.  Guam’s governor has a duty to every son and daughter who puts of the uniform of liberty.  It’s an honor and a privilege I hold dear.  My commitment to our heroes will never falter.” – Governor Eddie Baza Calvo

Cemetery expansion to be completed by end of September
Governor Calvo’s Veteran’s Cemetery expansion and improvement project is 40% done.  By the end of September, the Guam Veterans Cemetery will have 2,000 new gravesites and 2,000 improved headstones.  The $3.3 million expansion and renovation project began late last year.  This is yet another campaign promise being met by the Calvo Tenorio administration.

Improvements prevent capacity issues at cemetery
When this project began, the cemetery only had two years of capacity left to accommodate future burials.  Once the improvements and expansion are completed, heroes for the next 20 years can be laid to rest among their fellow patriots.

Expansion funds 2,000 new gravesites
As part of the $3.2 million grant that funds the expansion, about 2,000 gravesites on two acres are being created for Guam’s brave men and women, and their families, to be laid to rest.  Of these gravesites, about 900 will be pre-placed, underground crypts, and about 1,100 will be columbarium niches (for cremation urns). The expansion includes entry monument and gates, roadways, an irrigation system, landscaping, and supporting infrastructure.

Existing graves also are improved
This project also improves 2,000 headstones that already exist at the cemetery.  They were raised, realigned, and cleaned, and the surrounding turf and supporting infrastructure was rehabilitated over the cemetery’s current 13-acre sprawl.  These improvements will be complete in a few weeks, when landscaping work is finalized.  This component of the project cost around $160,000, in addition to the $3.2 million expansion grant.