Guam – The Governor’s Office issued the following release Monday in its ongoing campaign win support for the purchase of Core Tech’s Tiyan facility.

The release from Adelup argues that “purchasing is cheaper than leasing” the facility.

READ the release from Adelup below:

Why it’s financially better to buy Tiyan
The reasons why buying Tiyan for a new central high school, DOE headquarters & warehouses, and a charter school incubator is cheaper, better, and more financially-sound than continuing to lease it:

*  Purchasing is cheaper than leasing. If the AG doesn’t sign any of those documents by December 31, 2013, then GovGuam will be forced to pay a larger lease amount than the purchase offer that was negotiated. In this scenario, GovGuam must give up $142M to tax credits to lease the current Tiyan property rather than giving up only $125M in tax credits to purchase the property where Untalan Middle School is now. If this transaction were done in terms of actual payouts, paying $125M to own something is a lot better deal than paying $142M to lease something, then give it back when you’re done leasing it.

* This is more financially-sensible than the construction of JFKHS, Southern High School, and Okkodo expansion. Purchasing Tiyan with the construction of several new buildings is cheaper, per square foot, than any of the recent high school construction projects. And that includes the calculation of all the other Tiyan properties and buildings aside from the central high school. And unlike the the previous high school facilities (which were bond funded), the price tag for Tiyan includes the purchase of the property itself. That is a major positive investment of assets for GovGuam that did not occur with the hundreds of millions spent on the previous high school construction projects.

* GovGuam doesn’t write a single check to CoreTech. Under the terms of the purchase, taxpayers won’t ever shell out cash for the annual ‘payment’ to CoreTech on principal and interest to buy the property. That’s because the ‘payment’ source isn’t a payment. CoreTech will get to use or assign an annual value of tax credits.

* No prepayment penalty. At any time during the term of repayment, GovGuam can pay off the principal balance through other means (direct payment through appropriation, bond financing, etc.) and CoreTech will not charge a prepayment penalty. This deal is even better than going to the bond market.

* What other property on Guam is school-ready? Perhaps the most important point is that this facility is the only one on Guam near-ready to be a high school. The government could apply the tax credits to another property (via legislative approval), but it would take at least 18 to 24 months before construction on that school ends. And this brings us to another point:

* The additional tax credits don’t apply until new buildings are done and occupied. Part of the purchase agreement is that CoreTech will front the cost of new construction. That is unlike any other financial agreement GovGuam has ever had. For instance, bond payments on capital infrastructure start without regard for whether the project has even begun. The increase in tax credits to CoreTech, in this case, won’t happen until the new facilities they build on their dime are turned over to GovGuam and occupied.

* The facilities are clean, safe, and first-class. A senator has complained that these buildings are very old, and therefore not a good investment. Well, if he were to qualify his statement with data, it would be wrong. The existing buildings and properties all were tested for structural stability and mitigated for any hazards. As a matter of fact, these facilities were all renovated and modernized, to include hard wiring for technology, new air conditioning, etc. If the senator were to qualify his statements with the opinion of people who actually have had the pleasure of studying or working there, he’d know that, generally, the JFK and Untalan communities were very much pleased with that campus.

* There will be several new buildings as part of the purchase agreement. Part of the plan is to build a new gymnasium to meet high school standards. That will complete what’s needed to open a central high school. The second piece of property we will acquire will house DOE’s central offices, plus two warehouses and an annex. All of those buildings will be constructed as well. The third piece of property is where the charter school sits.

Comparing the ‘cost’ of Tiyan to the other HS projects:
As you can see from this chart, the central high school portion of the Tiyan purchase is less expensive by cash value than JFKHS. The entire Tiyan purchase, which includes the DOE central office and warehouses & the charter school and all the real estate under these facilities is nearly double the size of the JFK facilities, 5.5 times the size of the Okkodo expansion, and far less expensive per square foot than either of those facilities.

NOTES FOR CHART BELOW:
–       The Annual Cost is an average taken over the term. The annual ‘cost’ fluctuates according to bond covenants and lease-purchase agreements.
–       Comparing the Tiyan Purchase Offer with the average annual ‘cost’ at $10M to both Okkodo and JFKHS is not comparing ‘apples to apples.’ While the cost of JFKHS and Okkodo are for public school facilities, the total cost of Tiyan includes the GDOE central and warehouses facilities, and the charter school.

These are the costs for the Tiyan properties:

The ‘Cash Purchase’ column shows how much GovGuam can pay with outright cash to purchase the properties and forego yearly ‘payments.’ The ‘Owner Financed Purchase Total’ shows the amount CoreTech will use or assign in tax credits over the term of the leaseback period. This amount includes principal and interest on the leaseback. 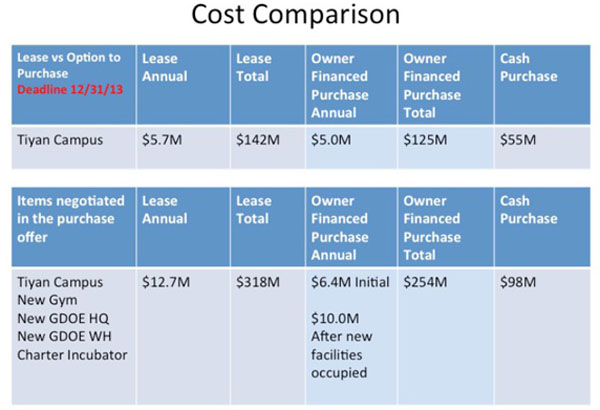