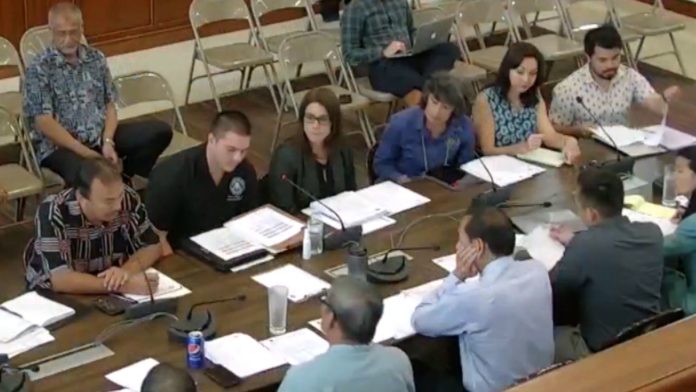 Guam – The administration is anticipating a $48 million-dollar shortfall in government cash due to the Trump tax cuts. This shortfall has GovGuam scrambling to find ways to make up for the cuts. Where did this figure come from? During the last Special Economic Services meeting on January 31st the administration explained their methodology.

Bureau of Budget Management and Research analyst Jason Baza said they looked at the new tax categories for individual reductions and the average reduction was about 1.9 percent, but they opted to go with a 3 percent reduction to both individual and withholding taxes just to be on the safe side. “So to get our estimate for FY18 we took the adopted level for FY18 for both actually all three categories. Individual at $78.3 million we did at 3 percent reduction from that number which came out to a $2.3 million full year impact. Prorated at over 8 months that came out to a $1.5 million-dollar reduction for individual. Same concept for withholding, the $281 million adopted level reduced by 3 percent over a full fiscal year came out to $8.4 prorated for 8 months of that number would be $5.6 million-dollar reduction. Corporate was the easiest to actually calculate because it went from 35 percent to 21 percent. So, we took the taxable income that the adopted level of 152.6 would yield which would be dividing the 152.6 by 35 percent at the current corporate level to come with a taxable income of $436 million. And we multiplied that taxable income of $436 million by the new rate of 21 percent which yielded a full year impact of $61 million or a prorated rate for 8 months of $40.6(million). So, the amounts of $1.5(million), $5.6(million) and $40.6(million) between the 3 categories came out to the $47.8 million,” said Baza.

Rev&Tax Director John Camacho agreed with these numbers. “They kept the 7-tier rate, but they reduced some of the rates down. Some are I think 2-3 percent and that’s how we agreed to use the 3 percent rate reduction on what was adopted. For the corporate basically it’s a onetime rate it’s for life it’s a 21 percent and they did the calculation and when we compared that calculation with how we arrived at the previous amounts that we were giving out it was very close in other words their taxable income was very close to our taxable incomes the way they estimated it. So that basically is something that we confer with and accepted that estimation,” said Camacho.

The Public Auditor came up with a similar figure. “We independently did our own calculation and surprisingly our number, our number was just a million dollars off, but it is on the high side because the one assumption and I had discussions with Lester about his calculations and I say that number is on the high side because it assumes that all corporations are December 31st corporations. What I was not able to adjust the number by is what percentage are not 12/31, because it’s the 12/31 corporations that are gonna be able to take the full effect, but it will be in 2019 that the rest of them will have the full effect,” said Public Auditor Doris Flores Brooks.

The one number she didn’t factor in was the reduction to section 30 funding which comes from income tax withholding of military and federal employees living on Guam. But even with this the Public Auditor says she does not expect the shortfall to be any higher than $47.9 million. “If it’s less than 47 then good but I don’t expect it to be higher than that,” said the Public Auditor.

BBBMR Director Lester Carlson said the Trump tax bill was passed on December 30th, Guam time and the IRS didn’t release the new tax tables until January 12th which is why they were only able to come up with the estimated shortfall a few weeks ago.