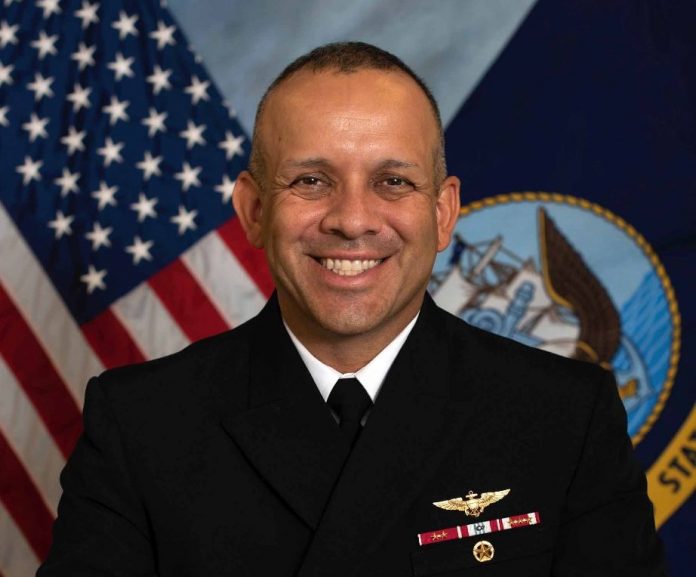 Admiral John Menoni, the commander of Joint Region Marianas, will be leaving Guam soon for his next duty station.

According to the Department of Defense, Menoni’s next assignment is in Virginia where he will serve as commander of Expeditionary Strike Group Two, in Virginia Beach.

Menoni is now winding down his duties as U.S. Indo-Pacific Command representative for the region.

It was during his tenure that the military and GovGuam worked closely together to deal with the COVID-19 pandemic and the temporary stay of the virus-infested USS Theodore Roosevelt on Guam.

In an interview with NewsTalk K57’s Patti Arroyo, Menoni says that despite the pandemic no issues were put on the back burner.

“We were working 24/7 ops … I don’t think that it compromised anything but it did put an enormous strain on the Department of Defense as well as GovGuam and everybody else that was pitching in on the fight,” Menoni said.

In the case of the COVID-19 outbreak aboard the USS Theodore Roosevelt, Menoni said that how the community reacted displayed the humanity, the hospitality, and the link between the US Navy and this region’s people.

“And so it laid that out for everybody to see. And that is an absolute positive. The other thing that it showed us is how people respond during a crisis. There are folks that acknowledge a crisis and just got on with business and try to work through it together … and there are other folks that did what they did and that wasn’t helpful,” Menoni said.

He added: “But for the most part, it was great to see everybody truly pitching in on the fight. And when I say everybody, I’m not talking about just uniformed … it’s uniforms … it’s DOD civilians … GovGuam employees … it’s folks from the community that have no affiliation with either local, territorial or federal service … just people who wanted to help.”

Aguigui presented Menoni with a Guam Commendation Medal, a handmade galaide model, and other various gifts, to thank Menoni for his service, mentorship, and friendship over the past 18 months as the Commander of Joint Region Marianas.