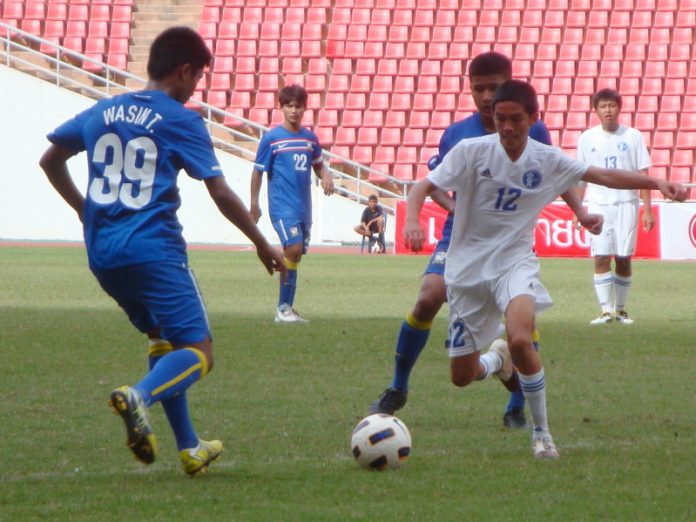 Guam – Guam’s Under-16 national team took a hard beating from Thailand during their second match of the AFC U-16 Championship Qualifiers on Wednesday afternoon. The first half of the game was intense as both teams practically raced each other to every pass and fought to win any ball that was up in the air. The number of touches to the ball was kept at a minimum, as both
teams were quick to mark-up players and put pressure on anyone holding the ball for too long.  When Thailand had possession of the ball, they always looked for an open man and took advantage of every scoring opportunity. Whenever Guam’s defense closed in and pressured Thailand’s offense, Thailand dropped the ball way back to the defense, regrouped, and set up the for the next play.

Thailand’s careful handling of the ball led to many goals throughout the game, especially in the first half. The first goal came in the 7th minute when Thailand’s Jeerawut Kulchart received a pass just inside the 18-yard box then slipped the ball past Guam goalkeeper Edward Perez.  Thailand’s midfielder Saran Puangbut scored the second goal just one minute later.

As the first half of the game progressed, the pace increased and adrenaline was running high.  After Thailand’s third goal of the game, players from both teams were being warned about excessive fouling, but it was Thailand’s Sittichok Kannoo and Guam’s Keith Suber and Phillip Ogo who were given yellow cards. Thailand scored four more goals before the end of the first half leaving the score at 7-0.

Guam shifted gears in the second half and did a much better job at defending and attacking.  “They switched their mindset in the second half. They understood the game better,” said Head Coach Tetsuo Yamamoto in an interview with a Thai news crew. Guam certainly did a good job of limiting the number of shots Thailand took on goal despite losing Ogo to a second yellow card, but Thailand made their shots count and got in four more goals before the game ended to make the final score 11-0.

While the Guam team lost big on the scoreboard, their performance was admirable. Guam played extremely hard throughout the entire game and tried to win the ball as often as they could. They showed a great amount of and determination and perseverance. Many people in the crowd commended the Guam team for their performance after the game by clapping as the team walked back to the locker rooms. “They improved their level in this game,” Yamamoto said.

Thailand is currently the top team in Guam’s AFC qualifying group, Group G, with two wins in as many matches. Guam is now 0-2 and play Indonesia next on Saturday at 6 p.m. (9 p.m. Guam time).

In other matches yesterday, Australia defeated Myanmar 4-0 while Indonesia slipped past Hong Kong 2-0.