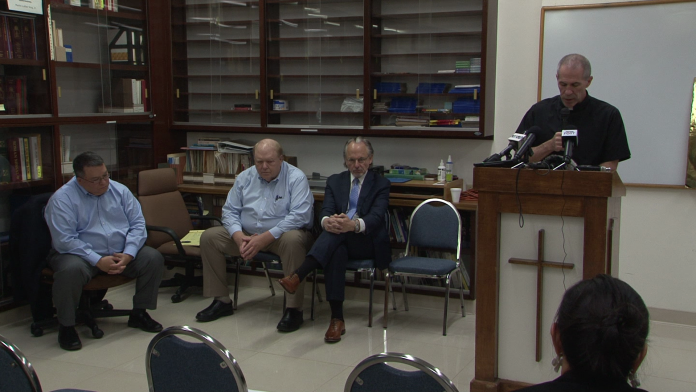 Guam – A faltering church, first with the stacks and stacks of sexual abuse lawsuits and now plans for bankruptcy filings.

Acknowledging the odd timing of their announcement—just a day after the general elections—the Archdiocese of Agana hastily called for a press conference to make an urgent announcement while their attorneys are still on island.

Archbishop Michael Byrne opened up the floor with a sentimental message about belonging to the church’s now-tainted history. He then turned it over to the archdiocese’s legal counsels to explain their decision behind filing for bankruptcy.

The news comes just a few weeks after the church failed to reach a settlement agreement with the nearly 200 victims of sexual abuse.

“What we learned is we weren’t gonna resolve the cases in that format, in that setting, and so we had to look at a different option and the option is bankruptcy,” said Attorney Keith Talbot. “Bankruptcy is the method to deliver the greatest measure of justice to the greatest number of victims.”

According to Talbot, out of the nearly 200 cases of sex abuse filed against the church, they were only able to reach a monetary settlement with two plaintiffs. But just how short the church was in meeting the amount sought by the scores of victims in the ongoing mediation process, Talbot could not disclose.

So what does this mean for the church, its schools and its parishes? While the future may seem grim, the legal counsels were optimistic about the outlook for the Archdiocese. Attorney Ford Elsaesser noted that there have been 19 dioceses in the U.S. that have also filed for bankruptcy and all of them have had a favorable outcome.

“The dioceses and the archdioceses in the stateside that have gone through this process, in all of those cases to date, the operations of the parishes and schools have continued and continued uninterrupted and we anticipate exactly for that to happen here as well,” a hopeful Elsaesser noted.

The Archdiocese will be filing for bankruptcy between December and January with a bar date expected to be set for May of next year. The bar date acts as a deadline for victims and survivors of sexual abuse to file a claim if they haven’t already done so.

However, that bar date is not decisively final. Attorney Eslaesser says a future claims trust may be created for claimants to file against the trust.

With their bankruptcy filing, the church will be forced to disclose and list all of its liabilities as well as any assets they may have. That liability will include any damages the plaintiffs are seeking. In most of the cases filed, the sex abuse survivors have asked for $5 million of each defendant.

Although Elsaesser doesn’t anticipate any impact to schools and parishes under the church’s control, he acknowledges that one can never be sure.

“I would never say there will never be any impact but in my experience, which goes back to one of the first cases, the Diocese of Spokane, in that case I represented the parishes, not the diocese itself. The operations of the parishes went forward without any interruption,” he explained.