Attorney General Leevin Taitano Camacho joined a bipartisan coalition of 41 attorneys general urging the U.S. Department of Veterans Affairs (VA) to rescind a newly-implemented policy that will result in further delays and confusion in the claims process.

In a letter submitted to Under Secretary for Benefits Paul Lawrence, the coalition asks the department to postpone and reevaluate changes made to its longstanding claims review policy. In April, the VA announced plans to rescind its decades-old policy of allowing accredited veterans service organizations (VSOs) to review claims decisions prior to finalization. The coalition argues that the change will further delay benefits veterans have already earned.

For decades, the VA has given accredited VSOs a 48-hour period to review claims decisions prior to the department issuing its final determination. According to the VA, review by VSOs helps identify any errors or issues that may require clarification or additional discussion prior to the claim being promulgated. But in April, the VA announced the VSO review process would be rescinded, meaning that any corrections or clarifications must be made after a final determination on a claim has been issued.

“It is a concern that the 48-hour review period is being withdrawn especially when locally, we have over 10,000 veterans and just one accredited veterans service organization to assist them with filing claims. They should not have to go through more red tape to receive their benefits, nor should they have to deal with a confusing and lengthy appeal process on inaccurate claims,” AG Camacho said.

In the letter, the coalition points out that review by VSOs provides the last opportunity to identify and correct errors in claims before they become part of the official record and are used as the basis to deny or diminish benefit awards. Mistakes not caught prior to promulgation can only be rectified through a lengthy and complicated appeals process, meaning veterans must continue to wait to receive the benefits they have earned. In addition, the attorneys general argue that the VA’s decision to implement the policy change comes in the midst of the COVID-19 pandemic, as the VA, VSOs, and veterans are already struggling to follow existing VA policy. Implementing such a significant change as individuals work remotely with access to fewer resources, will further complicate and add to confusion in the VA claims process.

Additionally, the coalition states that the VA has provided no justification for the substantial policy change and has not allowed input from VSOs or veterans. In the letter, the attorneys general urge the VA to postpone implementation of such a dramatic change in order to allow input from VSOs and veterans, and evaluate whether there are alternative solutions that do not completely eliminate a critical step in the review process.

In another veteran-centric initiative last May, AG Camacho joined a bipartisan coalition of his colleagues urging the U.S. Department of Education to discharge the student loans of veterans who were disabled as part of their service. 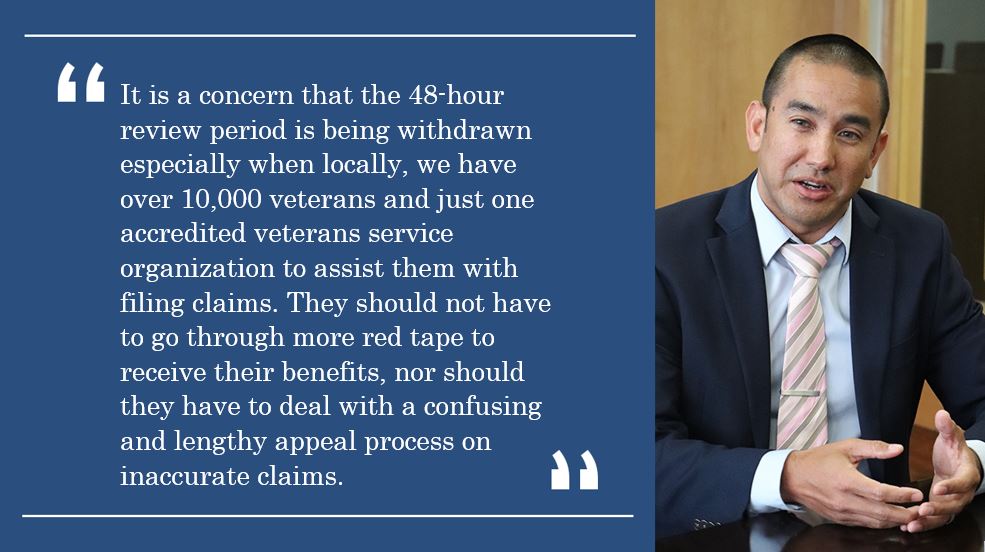