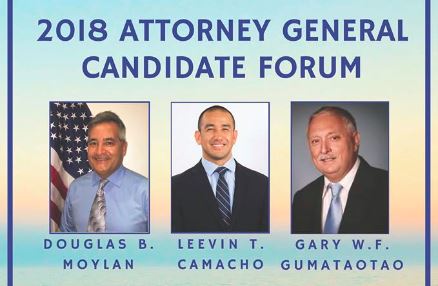 If the attorney general’s race has seemed a little quiet compared to the mass of  boisterous gubernatorial and senatorial campaigns thronging the media, that all changed on Fox 6 television and the PNC News First Facebook page Monday afternoon. Loud and proud, the Guam Bar Association and Pacific News Center co-sponsored and broadcast the Attorney General’s Election Forum “LIVE” from the Guam Museum in Hagatna.

Attorneys Leevin Camacho, Gary Gumataotao, and Doug Moylan are gunning for the Office of Attorney General soon to be vacated by retiring AG Elizabeth Barrett Anderson. And all three contenders showed up to Monday’s forum ready to be seen and heard on several of the island’s most pressing legal issues.

Noting considerable crime rates committed among non-US citizens after they legally migrate to Guam, former elected Attorney General Doug Moylan told the audience that criminal deportation is a priority, but that it must be done the right way.

“Those people that are not US Citizens should not have the privilege of violating our laws, hurting our people, and remaining in our community,” Moylan said. “The type of cases should be limited to the criminal cases, and it should be done in conjunction with the Attorney General, our ability to do plea agreements, and a defendant’s willingness to just leave without being punished.”

The Organic Act of Guam leaves it up to local lawmakers whether to keep the island’s attorney general an elective office or to make it an appointed one. A firm believer in the value of an AG’s independence, Moylan wants the Organic Act amended by Congress to keep the AG’s Office elected and ensure it stays that way.

Meanwhile, contender Leevin Camacho wants to keep the AG’s Office elected to give politically disconnected folks like himself a fighting chance to stick up for everyday people.

“Should the position remain elected? Absolutely!” he told the crowd. “‘Cause that’s the only way that you’re gonna know. You’re not gonna just have political insider after political insider after political insider holding that position just following whatever the governor wants. This is the only way that anyone—whether you’re a JFK graduate [pointing to himself], whether you went to the most prestigious high school or university—as long as you care about the island and you have the guts to stand up and run for office, that’s what it’s all about.”

Their opponent Gary Gumataotao said several governors have rightly preferred an appointed AG insofar as attorneys general of the past have been less than cooperative in providing solicitor services to public agencies in need.

But noting Lieutenant Governor Ray Tenorio’s police gun-grabbing incident last month, Gumataotao said it’s high time an elected AG use his or her bully pulpit to crack down on officials who might otherwise get away with crime or corruption.

“But then there are situations where we’re not seeing the prosecutions that we want to see,” Gumataoto said. “Then you have to wonder what kind of political control is swayed, is coming into play, to prevent those. Just like right now, we’re seeing where the Lieutenant Governor committed a felony, and yet nothing’s been done about it.”

Gumataotao suggested that the time might also be ripe for electing an island prosecutor.