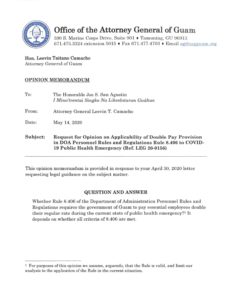 GovGuam employees on the frontlines of fighting the spread of the coronavirus are not entitled to double pay according to an opinion from the Guam Attorney General because the administrative rules authorizing that kind of compensation have not been met.

The opinion was requested by Guam Senator Joe San Agustin who chairs the legislature’s finance committee.

In his response Attorney General Leevin Camacho acknowledged the inequity of the current rules, but he says changing those rules “is a matter of policy most appropriate for the Legislature.”

The opinion memorandum highlights the three key criteria that need to be meet in order for double pay to be authorized:

“There is no question that the first criteria has been satisfied,” wrote Camacho. “However, the answer to whether the remaining criteria have been satisfied may not be as neatly packaged as desired.”

The second and third criteria requiring that employees report to a closed GovGuam facility remain in question.

1.Fully Operational – Open to the Public:

Several GovGuam agencies have remained fully operational and they have allowed for public access, during the ongoing health emergency.

“It follows that the facility is not closed and employees who report to work would not be eligible to receive double pay,” wrote Camacho.

If an agency is completely closed, “then there is an argument that employees who remain on duty to provide essential services may be entitled to double pay.”

3.Operational but Closed to the Public:

This is “the more difficult category to assess,” writes Camacho. “One could argue that these agencies are closed and that their essential employees who remained on duty may be eligible for double pay, or vice versa.”

A determination would have to be made as to each agency’s open or closed status, Camacho wrote, and “our office is not in a position to categorize executive branch agencies. The “appointing authority” bears that responsibility, states Camacho.

“We recognize the application of (Rule 8.406) to our current state of emergency could lead to unintended and illogical inequities among employees in different agencies,” states the Attorney General in his conclusion.

Yet GovGuam employees who are not exposed to the virus but continue to provide essential services at closed agencies not open to the public would be eligible for double-pay.

But the Attorney General’s role “is to interpret the rules as they are written,” concludes Camacho. And the Organic Act “expressly authorizes the Legislature to set the compensation of all government of Guam employees.”

Governor Lou Leon Guerrero has said she is opposed to double pay for GovGuam workers saying her government can not afford it.