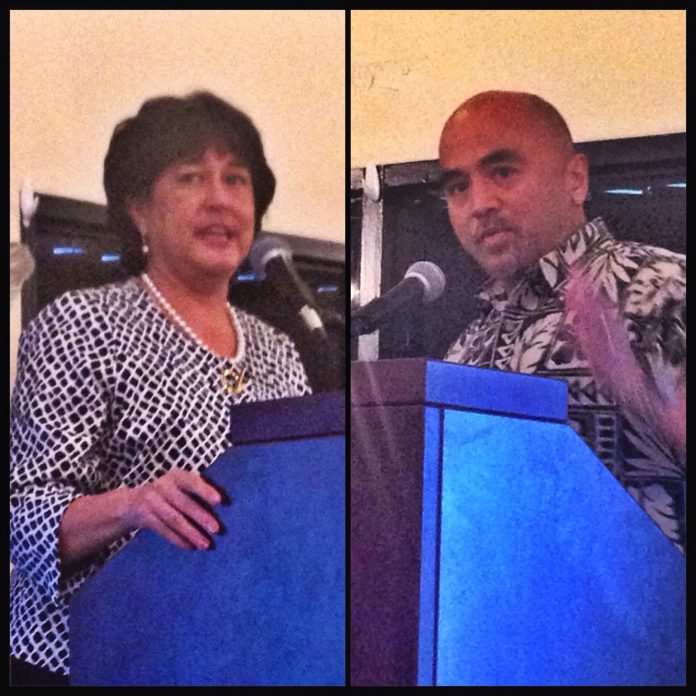 Guam – The enforcement of medical marijuana if it becomes law and the rise in crime rates were some of the topics discussed in today’s Attorney General Debate.

Incumbent AG Lenny Rapadas and AG candidate Elizabeth Barrett-Anderson squared off, this time in front of their colleagues with the Guam Bar Association. Medical Marijuana was an issue brought up. Both were asked how they would handle the implementation and enforcement of the Act.

“If it becomes law and it does go through there is still a lot of work that needs to happen with that. And we do intend to become involved with all the different agencies that are involved,” Rapadas said. “If it’s something that’s important to the voters, that is something that we will attempt to do.”

“My concern is how this commission is gonna develop the rules and regulations. Enforcement has to be a critical part of those rules and regulation. And I hope we can have more school resource officers not just in the court system but in the Guam Police Deparmtnet who can service all our schools,” Barrett-Anderson said.

Another question focused on crime rates. Specifically, Guam Bar members asked how each would address the decline in the number of prosecutions despite the increasing rates in crime.

“I just don’t think that the supreme court’s statement that there are less prosecutions is in and of itself an issue that I’m concerned about. I’m concerned about if I’m elected as AG, working with Guam Police Department, revamping and strengthening the Attorney General’s office and working with the Judiciary of Guam,” answered Barrett-Anderson.

Rapadas said: “When it comes to actual filings in our case one thing that I think many of you should know and notice is that over the last year and a half we’ve been in trial every single day … so it’s unprecedented at this point that the court has been going on and on and on with its cases and its case load, and you know what that does? That causes our limited staff to have to pick up the ball, pick up cases and run with them … what that means is, there are less filings, unfortunately.”

The debate was held at the Top of the Mar.