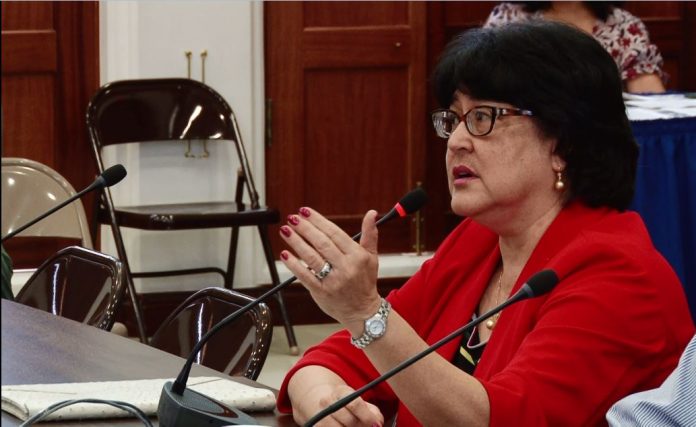 As ever, hopes are high and interest is pointed for Guam’s political future. But will the Ninth Circuit Court of Appeals uphold the native-only vote in the years-long Dave Davis case, or will it favor 14th Amendment equal protection and 15th Amendment voter rights for all US citizens, regardless of origin? As you’ll learn in this next report, native inhabitants of Hawaii are just as keen to know as Chamorros are.

Guam – During a late morning status briefing at the Guam Congress Building on Friday, retiring Attorney General Elizabeth Barrett Anderson told lawmakers she just couldn’t get into the details of her team’s presentation on the eve of oral arguments before the Ninth Circuit Court of Appeals.

“I’m never in favor of arguing the case until it’s ready to be argued,” Barrett Anderson said.

It’s now less than two weeks till the Hawaii hearing on the Davis Case against native-only voter registration in the long-frozen plebiscite to let only Guam natives decide whether the unincorporated US territory should be granted statehood, free association, or independence. Barrett Anderson said the greater indigenous Pacific rights movement is watching closely.

“I have heard from individuals in the state of Hawaii who are active in the Hawaiian and Ohana organizations there that people in Hawaii are looking to attend this case,” she said. “They are very concerned and they will follow any case that also might have an impact on the rights of the native inhabitants or the Hawaiians or other native groups in the Pacific.”

Arnold “Dave” Davis sued the Guam Election Commission in 2011 when he was denied voter registration for the plebiscite because he  did not meet the definition of a native inhabitant of Guam—a person either living on island before US President Harry S Truman signed the Organic Act into law, or a descendant of such a person.

The US District Court of Guam ruled against Davis, stating his case was not ripe because no election was imminent. The Ninth Circuit reversed that decision on the basis that Davis had been denied voter registration, so the Ninth remanded the case back to Guam, where the District Court then ruled the local legislature’s plebiscite enactment racially discriminatory and that it denies Davis’s 14th Amendment equal protection rights and 15th Amendment voter rights.

Over a year ago Barrett Anderson filed a government appeal challenging the decision on the basis that cases cited in the Ninth Circuit decision do not apply to a purely political plebiscite whose outcome has no power to change Guam’s political status by law, anyway. The notion is that the plebiscite is designed merely to be a statement of preference and free expression.

“Senators, it’s ah, I know it’s an uphill battle on this case, because the courts of our nation and the Supreme Court of the United States are very guardful of equal protection violations under the 14th Amendment,” the attorney general told lawmakers.

“And, of course, something that we are all very familiar with is the right to vote, and that also is a constitutional right very much protected. However, I want to let you know that I believe that the arguments that have been filed are very good arguments. The fact that the Dean of Boalt Law School has looked at our arguments and supports the concept of our arguments is very reassuring.”

The United States Court of Appeals for the Ninth Circuit will hear the case before a three-judge panel on October 10, at the William S. Richardson School of Law at University of Hawaii at Manoa in Honolulu. Assistant Attorney General Julian Aguon will serve as primary counsel in arguing the case for Guam. He will be joined by constitutional law expert Erwin Chemerinsky.

Come January, Barrett Anderson will be succeeded as attorney general by either Leevin Camacho or Doug Moylan, following Guam’s Nov. 6 general election. Barrett Anderson has opted not to run for another term.