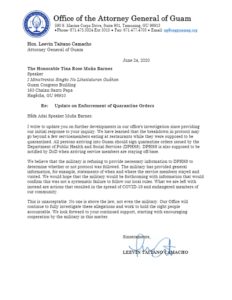 Attorney General Leevin Camacho has stepped into the controversy over the Andersen Air Force base unit that broke quarantine at the Reef Hotel, 35 of whom ended up testing positive for COVID-19.

“No one is above the law, not even the military,” wrote Attorney General Leevin Camacho in response to a request for an investigation from Speaker Tina Muna Barnes.

Camacho said that his office has learned that the failure of some airmen to follow protocol “may go beyond a few service-members eating at restaurants while they were supposed to be quarantined.”

The Attorney General said that his office believes “the military is refusing to provide necessary information to Public Health to determine whether or not protocol was followed.”

He points out that everyone arriving on Guam during the ongoing pandemic is supposed to agree to and sign the quarantine statement issued by Public Health. And Public Health is also supposed to be notified when arriving service members are staying off-base.

Camacho said that the actions of this particular military unit “resulted in the spread of COVID-19 and endangered members of our community.”

He called that un-acceptable and his office will continue to “fully investigate these allegations and work to hold the right people accountable.”