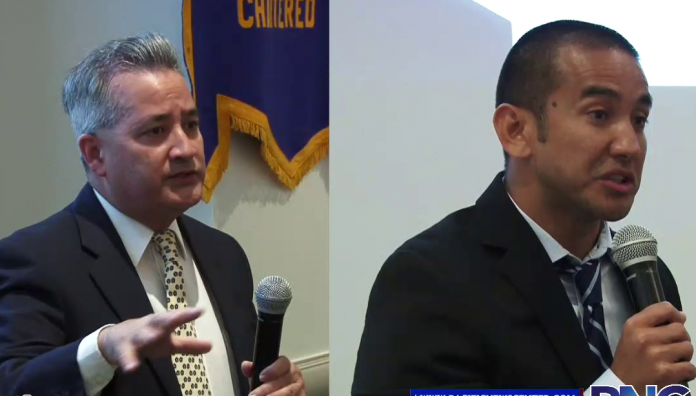 Guam – In an interesting twist in the race for attorney general, after Attorney Leevin Camacho secured a landslide victory in the primary election against Doug Moylan and Gary Gumataotao, losing candidate Gumataotao now says he will back his “best friend” Doug Moylan.

All three were on News Talk K57 today beginning with Gumatoatao who announced that he will campaign for Moylan and encourage his followers to vote for him in the general election, hoping with their combined supporters, it will be enough to beat out Camacho.

Next, Moylan went on Patti Arroyo’s morning show reiterating some of his statements made in an email, diminishing Camacho’s platform to a debutante race, harping on Camacho’s lack of experience, especially when stacked up against Moylan and Gumataotao’s combined 60-plus years.

“I use those kinda loose words like it’s not a debutante contest for him, it’s not who has the nicest platforms. When you go into office, you are, by definition, going to hurt somebody. When you go into court, especially the criminal cases, when you’re looking to take away somebody’s freeodom and put them behind bars, you think they wanna vote for you? You think the family wants to vote for you? Let alone the bigger idea of the AG to ensure there’s no government corruption and that creates enemies; it creates political enemies,” declared Moylan.

After hearing about Moylan’s scathing remarks, Camacho called into Phill Leon Guerrero’s show to defend his record. Camacho also responded to comments by Moylan that the first time candidate lacks the courage to go after the present administration for potential corruption because of his family ties.

“So, if my friends, I’ve surrounded myself with people and family who follow the rules so I’m not concerned that the people I associate with are gonna be out there breaking the rules and maybe attorney Moylan doesn’t have that same type of network,” Camacho said. “But at the end of the day, the law’s law, and I will prosecute who violates the law and I will investigate anyone. In terms of record, in big cases, I’ve filed lawsuit against the federal government where they failed to comply with law. I’ve filed lawsuits against the government of Guam when they violated the law.”

And on Moylan’s statements about how this race is not about how beautiful your wife is or how cute your kids are, Camacho bit back, “I do have a beautiful wife and very cute kids. Just so you know I’m guilty as charged on those two.”

And late this afternoon, another twist to the story. Just as Moylan announced that Gumataotao would officially be joining his campaign, Gumataotao wrote back in an email saying “I have not yet agreed to undertake this position.” However, Gumataotao later clarified that he did, in fact, agree to be Moylan’s campaign manager, noting that he had misread the announcement to state that he would be the campaign treasurer.