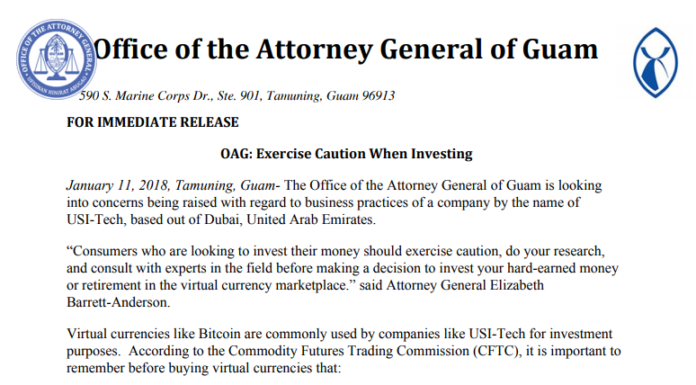 The AG is advising residents to exercise caution, do their own research, and consult with experts before making a decision to invest.

Guam – The Attorney General is now looking into concerns being raised with regard to business practices of an investment company called USI-Tech.

The Dubai-based company claims to sell Bitcoin packages and other virtual currencies for investment purposes.  Residents have reportedly invested thousands of dollars into the investment company that is now under scrutiny for fraud in the state of Texas and in the province of New Brunswick, Canada.

Attorney General Elizabeth Barrett-Anderson is advising residents to exercise caution, do their own research, and consult with experts before making a decision to invest with USI-Tech.  The AG’s office also advised individuals not to invest in products they do not understand and only speculate with money you can afford to lose.

A release from Barrett-Anderson’s office offered only one specific caution regarding the company alleged to be a Ponzi scheme.

“The Security & Exchange Commission has also warned that some token sales or initial coin offerings (ICOs) similarly offered by USI-Tech can be used to improperly entice investors with promises of high returns,” the AG’s office advised.

You can read the AG’s entire release here.